For fifty years, the Marist Youth Encounter Christ program has led young Marists in the US to truly encounter Christ’s love. Since 1967, Encounter has become like a rite of passage for our young people, and from November 9 to 12, around sixty juniors and seniors from all eleven high schools throughout the US took the same journey many others have taken over the years. They were given the precious opportunity to reflect on who they are, how they enter into relationship with God, and how they, too, can make Jesus known and loved to those around them. This historic moment has given Brothers and lay people alike the chance to reflect on how the Encounter has changed the lives of their students, the atmosphere and culture of their school communities, and their own experiences with Christ.

We can’t discuss the history of the Encounter without going back to Bro. Phil Robert, who was instrumental in starting the Encounter program. He explained, in an oral history given before that Saturday’s evening mass, that he and the rest of the team wanted to “build a program to bring [students] closer to each other and to God.” “We sensed a joy in being together,” Bro. Phil recalls of the first Encounter. “Joy means God is present.”

Bro. John MacDonald, who was also present that Saturday night, went on to explain the historical significance of the Encounter starting in the sixties—an era generally known as one of change and restlessness. It was a time of war for the country, and of Vatican II for the Catholic Church. “The whole era was shifting and we were part of that enormous shift…it was a time of incredible changes and risk-taking.” Bro. Phil was “daring to drop the old formula for retreats” to focus on each student’s own experiences with one another and with God. The time was calling for action and involvement, for wider worldviews and empowerment. The Brothers answered that call to lead young people to discipleship.
Bro. Owen Ormsby, Executive Director of the Marist Brothers Center at Esopus, echoed that sentiment, saying that the early Encounter team “had the courage to say, ‘We believe in young people and want to give them a program...to show them their God-given talents can change the world.’”

Encountering Across the Country

Of course, this Marist culture of taking risks, one that dates back to Champagnat, was never contained to just Esopus, New York. Bro. Peter Guadalupe, one of the brothers responsible for reviving the Encounter program in Texas in the late nineties, knows all too well what taking risks and leading students out of their comfort zones entails.

“We couldn’t get many kids to sign up,” he recalls of the first Encounter of the revival. “They just didn’t know what it was. I think fear was part of that issue. So we brought seven kids up [to Esopus] for an Encounter so they would experience it, and they became the leaders in Texas.” Bro. Peter had his leaders convinced—they fell in love with the program—and now it was time for his other students to be, too. “It took a while to get students to warm up to [the first Texas Encounter]. I think we ended up with 25. And it was a great experience. It was absolutely amazing. And when [the participants] came back, they were on fire. When we announced the next Encounter, we were filled up immediately, just by word of mouth. It was really the kids’ word of mouth that made the Encounter successful. It was the working of the spirit. It was nothing that I did.”

That message of empowerment, of believing in young people’s abilities to change their school communities and then the world, has been a cornerstone of the Encounter program.
“I’ve seen adolescents come here and leave as adults,” said Bro. Bob Warren, reflecting on the many other Encounters he has witnessed. It’s Saturday afternoon, and we can hear music and laughter from the chapel down the hall. “They suddenly leave here realizing that, not only are they loved, but they can love. And they realize they are gifted . . . when they never really believed that before.”
“Sometimes we [high school students] feel unimportant,” said Toni Bryce later that day, a senior at Roselle Catholic, unknowingly echoing Bro. Bob’s sentiment. “So once you feel that value, it makes you want to be better and do better as a person. I now want to get more involved in campus ministry. After all, if we’re not doing anything in our community, there’s no point in being a part of it.”
Ash Johnson, the national chair of the Marist Young Adult Program, and that weekend’s rector, shared a similar belief. “I want these students to know how amazing they are,” she said, reflecting on why she keeps coming back to lead. It’s been almost six years since Ash was a participant herself. She, and the approximately dozen other Marist Young Adults who assisted that weekend, are living proof of what happens when Encounterites see they are loved, they can love, and they can bring Christ’s love to others.

“The legacy of the Encounter speaks in the amazing young adult community that has grown out of this program,” said Matt Fallon, Director of the Marist Youth and Marist Young Adult programs. “They continue to encounter God and help others to do the same. They are the reason and the continuation of what was started 50 years ago.”

“[These Encounterites] are the future,” said Eyda Alegret, a teacher at Christopher Columbus High School in Miami. “They will be leaving us and continuing on with their faith, wherever they may go.”[1]

As illustrated by the young adult team, recognizing that empowerment is just the start of the Encounter. The second, more crucial part, is setting out to use those recognized talents, and to deepen that relationship with Christ. It’s what many often refer to as the “Fourth Day”—the lasting challenge of the Encounter.
“Why do we hesitate to ask what God wants us to do?” Bro. Phil asked the Encounterites. “We have to search for what Jesus means [to us]. How do we become more attentive to the voice of God in our lives?”
“This [celebration] is not about celebrating fifty years,” Bro. Patrick McNamara, Provincial, said at the end of the weekend’s mass. “It’s about what you are going to do. Are you ready to embrace the Encounter message?”

The Marist educators, the ones who brought their students to this historic weekend, are confident that that these young people are up to the challenge.

“I’m seeing [my students] being so open to the process and getting excited about their faith,” said Patrick Meyer, one of the campus ministers at Marist High School, Chicago. “And they’re realizing the Marist connection and seeing that it’s so much bigger than Chicago...they’re going to bring back this faith...and their passion for this Marist charism. I see them helping others encounter Christ”

“I always see a change when they come back,” said Tony DelGiudice, a teacher from Mount Saint Michael Academy. “I’ve seen them get a little more serious, a little more introspective. A little more aware of the world around them...they have a better way of coping with the outside world and their lives.”

Timmy Hagan, campus minister at Roselle Catholic, nods along to this, and later notes “[After Encounter] you have more people who are aware of how they make an impact on the school. More people who are trying to bring this spirit back that makes them more accepting to other people and comfortable being themselves. The more there is of that in a school, the easier it is for other people to take more risks and put themselves out there.”

The greatest evidence of this, of course, is in the young people themselves.  “I will see things from a different perspective,” Lok-See Lam, a junior from Archbishop Molloy, said. “I’ll definitely be less concerned with things that are, in the long run, less significant, and focus on what’s more important.” 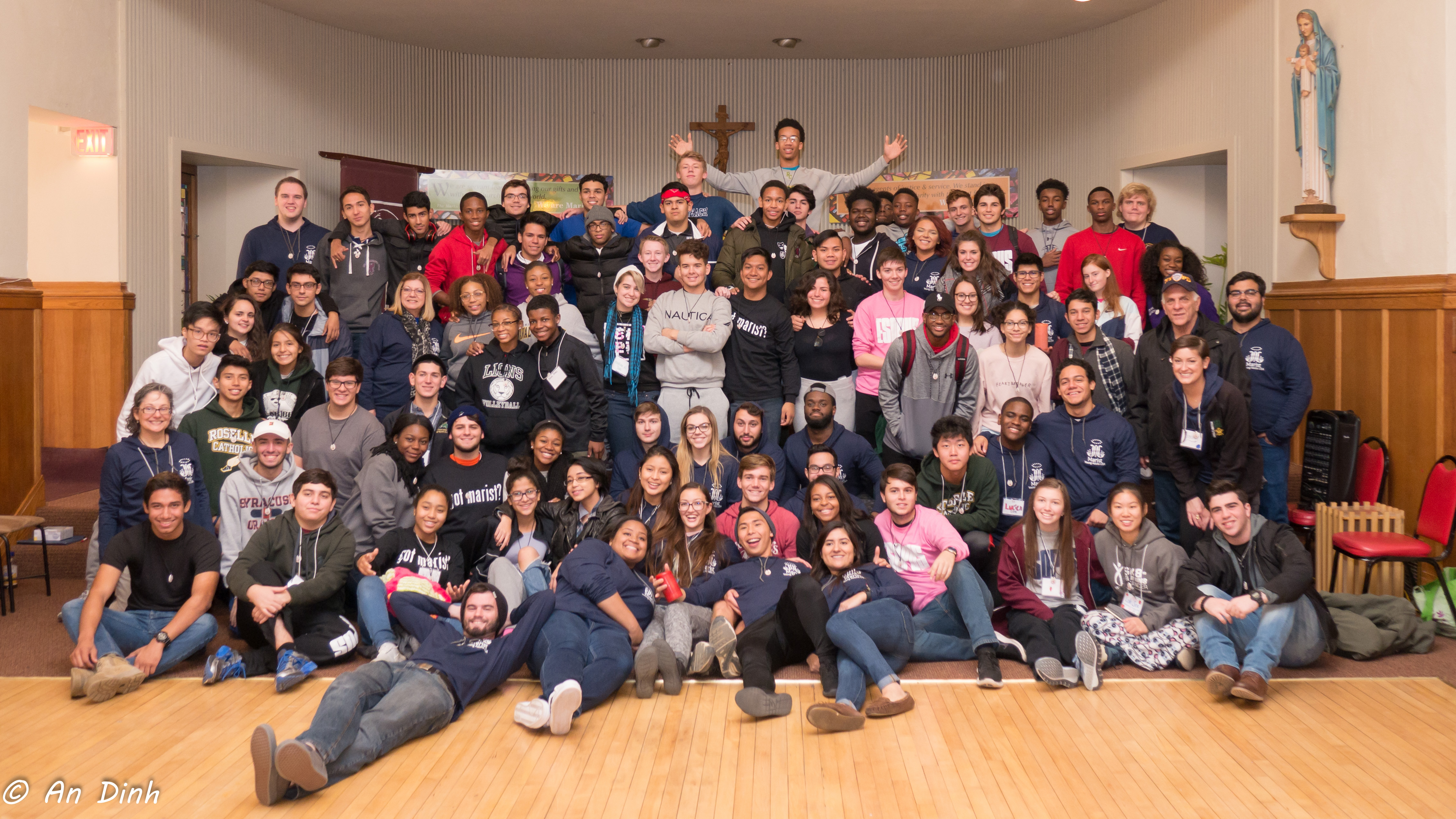 So what brings this message of empowerment, through Christ’s love, directly to the many participants over the last fifty years? Is it the talks? The many moments of shared prayer? The community mass?
“This program has many components,” Bro. Al Rivera, the Director of Office of Marist Life & Mission, acknowledged. “But they’re just things. What brings those things to life are the people who help lead the participants in this process.”
Tom Carvahlo, a Roselle Catholic graduate and Marist Young Adult, had a similar thought. “The people definitely make it what it is. Marist isn’t Marist without the people. We all make this so great.”

“Each member who invests in this invests their faith, their hope, their love,” said Bro. Bob. “They invest the gifts God gave them. And those gifts will always be what is needed at the moment. It doesn’t have to be what it was fifty years ago, or what it is today. God will grace us with whatever we need tomorrow.”