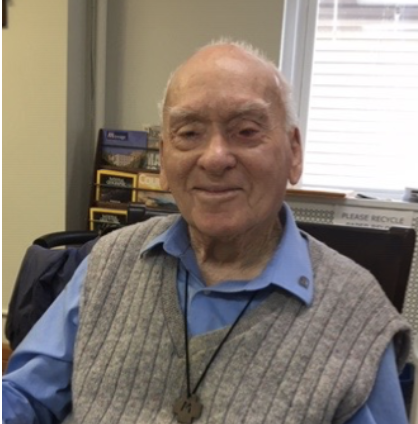 Brother Joseph Teston, a member of the Marist Brothers of the Schools (FMS) for more than eighty-one years, will be celebrating his 100th birthday on January 24, 2021. He will be the first Marist Brother in the United States to have reached this milestone since the Brothers established their first school in Lewiston, Maine in 1886.

Br. Joseph Teston was born in Savannah, Georgia. He first encountered the Marist Brothers when he entered the Marist School there when he was 5 years old. He says, “I’ve been a Marist ever since.” He entered the Novitiate in 1938 and took his first vows as a religious brother in 1940. His perpetual profession of vows followed in 1945.

Br. Joseph began his teaching career at St. Ann’s Academy on Manhatten (now Archbishop Molloy High School, Queens) in 1942. In 1948, he and three other Brothers volunteered to go to the Philippines to assist with the establishment of schools on the island of Mindanao after World War II. As more brothers volunteered for the mission and the number of Filipino vocations to our Marist way of life increased, grade schools, high schools, colleges and universities were established in Cotabato, Marbell, Lago, Jolo, Kidapawan, and Marikina. At one point from 1960-1963, Br. Joseph was appointed leader of the Marist District of the Philippines, a designation given to a missionary establishment that would one day become its own juridical province able to make its own decisions with regard to expansion and personnel.

After 24 years of missionary work in the Philippines, Br. Joseph returned to New York in 1972 where he took up residence in the Brother’s community at Archbishop Molloy High School. There he continued to assist the mission in the Philippines by raising funds for the work there. In 1975, he moved to Georgia to take up various teaching and diocesan assignments in Augusta and Savannah. In 2001, he moved to Miami, Florida where he assisted with various pastoral and training programs within the Miami Archdiocese. In 2011 he retired from active ministry and moved to Champagnat Hall, Bronx where he has the time to enjoy the rest he so deserves after eighty-one years of service to the Marist Brothers and the church.