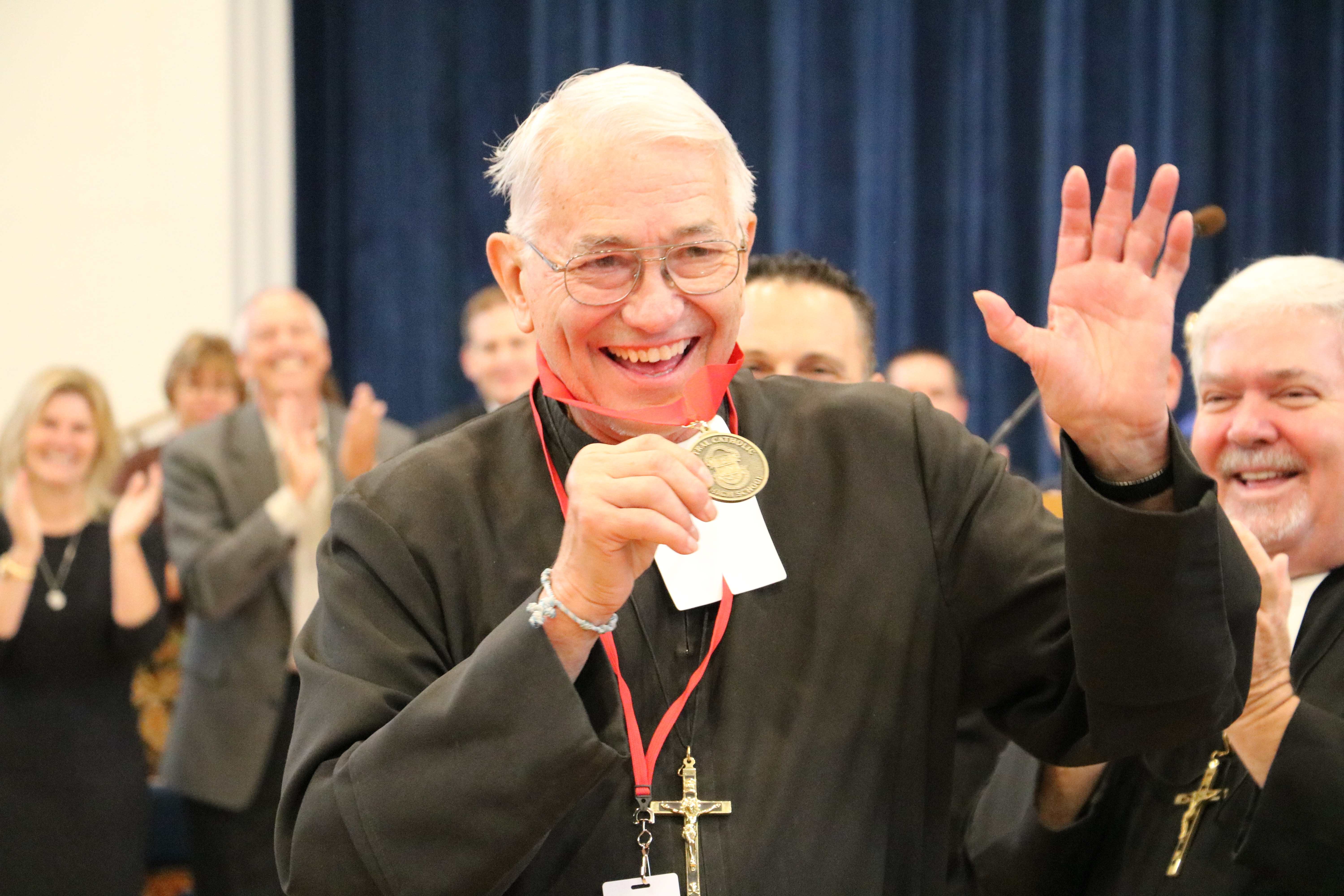 Over 1,000 Central Catholic High School students, faculty, staff, alumni, and friends witnessed Brother Rene D. Roy, FMS, a 1959 graduate of CCHS and former President of the school (2005-2009), being named President Emeritus during the Opening Mass at CCHS earlier this month. Br. Rene is the first person in Central Catholic history to be recognized with this title!

The honor was presented to Br. Rene by current Central Catholic President Christopher F. Sullivan ‘81 in collaboration with Mr. Gino Baroni ‘74, chairperson of the board of directors for Central Catholic, former board chairperson Mr. Joseph Faro ‘87, and Br. Patrick McNamara, Provincial of the Marist Brothers in the USA.

President Emeritus was bestowed upon Br. Rene as an honorary title for his distinguished service and continued support and guidance for the CCHS community as a whole. In addition to serving as president of CCHS, he was also vice president for mission effectiveness, and currently holds the role of campus minister for Central Catholic.

“All I do comes from loving the call to be a Marist Brother and living it daily with joy in my dealings with faculty and students,” said Br. Rene Roy. “Coming to Central Catholic each day is not work, but fun, joy, a pleasure without measure. I'm happy and honored with the acknowledgement and the thoughtfulness of the board of directors in giving me this historic honor.”

Br. Rene has been a Marist Brother for 58 years, serving as a missionary in Rwanda and on the Pine Ridge Reservation in South Dakota, as the Marist Brothers Vocations Director, and as a principal and as a president at Marist high schools.

Founded by the Marist Brothers in the heart of Lawrence, Massachusetts in 1935, Central Catholic High School enrolls 1,200 students from over 60 cities and towns. Students come from diverse backgrounds to form a caring community of faith, learning, and service. They advance to college in overwhelming numbers (nearly 100%) and move on to successful careers and positions of leadership in government, business, industry, academia, and professions. Central Catholic High School is fully accredited by the New England Association of Schools and Colleges. For more information, please visit www.CentralCatholic.net, call 978-682-0260, or email website@centralcatholic.net.