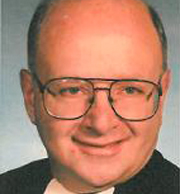 Brother Anthony entered St. Joseph’s Novitiate in Tyngsboro, Mass., in 1961 and served as a Marist Brother for 52 years. He taught, served as assistant principal or principal at eight primary and secondary schools around the country before retiring to Mount Saint Michael Academy in the Bronx, where he served as principal from 1992-1997.

The Mass of Christian Burial was held on Wednesday, June 4 in the Chapel at Mount St. Michael Academy in the Bronx and burial at the Marist Brothers Cemetery in Esopus, N.Y.