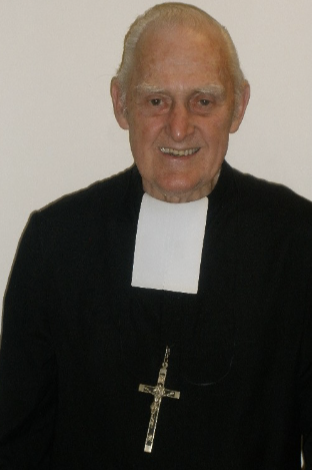 Brother Augustine “Gus” Landry, FMS, a member of the Marist Brothers of the Schools for 67 years, died on October 24th, 2017 at De LaSalle Hall in Lincroft, NJ. He was 89 years old.

Brother Gus was born in Fitchburg, MA. Prior to entering the Marist Brothers, he served as a First Class Fireman in the US Navy. He became a postulant with the Marist Brothers in 1949 and professed first vows in 1951 before working on the original construction of Marist College in upstate New York. From 1953 until 1956 he studied at the Marist College Scholasticate and earned a Bachelor of Arts degree

Brother Gus professed perpetual vows in 1956 before working another two years on the Marist College construction team. After taking a break to teach at Holy Trinity in Poughkeepsie, New York, for two years, he returned to the construction team at Marist College for one year in 1960. He also spent time teaching at Saint Agnes Boys High School in New York City from 1961-62 and Cardinal Hayes High School in the Bronx, New York, from 1962-1967.

In 1966, Brother Gus professed the Vow of Stability and the following year he attended the second Novitiate program. From 1968-2003 he worked in various roles at the Marist Brothers International School in Kobe, Japan serving as a director, teacher, and board chairperson. In 1996, Marist College honored Br. Gus with an Honorary Doctorate Degree for his time spent building the original buildings of the college.

Brother Gus was retired and lived at Champagnat Hall in the Bronx prior to his recent illness and death. He is survived by brother, nephews, nieces, his many friends as well as by his Marist Brothers of the Province of the United States.