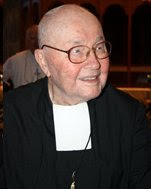 I’m very humbled and honored tonight to have this chance to offer these few brief thoughts on the life of our beloved Bro. Bernard Curtin.

Before I do though, a sincere word of gratitude on behalf of all the Brothers of our province and from all who loved Bro. Bernard, to the Community of Champagnat Hall and to all the nurses, nurse’s aides and the staff here who made his last few years so very comfortable and happy. In particular, over the past few weeks since his emergency surgery the Brothers and staff of Champagnat Hall, as well as the hospice staff of Calvary Hospice ensured that Bernie not only never suffered, but also that his final days were ones in which he was constantly surround by his Brothers and other loved ones. Every time I visited him over these past few weeks, there were at least two Brothers and a nurse’s aid sitting with him holding his hands. Several times a day the community gathered in his room to pray with him. It was Marist community life at its best. I reflected much on moments like that this past week and it reminded me of and deeply reinforced the last words of our Founder who said, “O what consolation when about to appear before God to know that we have lived in the favor of Mary and in her society.”

Each year in Esopus, we offer a number of Sharing Our Call Retreats for the teachers and staff from all our Marist schools around the U.S. During those retreats, there is a prayer service that speaks about how we as the MARISTS of today are able to do much because we are walking on the shoulders of giants. Bro. Bernie was one of those giants!

Bro. Bernard grew up in the Bronx, and was proud to be a life-long Yankee fan and was the only man I’ve ever known that could share first hand stories of meeting Babe Ruth and Lou Gehrig and seeing all those famous Yankee teams of the late 20’s and 30’s….

I first came to know and grow close to Bernie 11 years ago when I moved into our Roselle Community in New Jersey…having to also endure a number of other Brothers in the that community that followed the dark side of baseball by cheering for the Red Sox Nation was one of many opportunities for Bernie and myself to grow close and defend against such evil challenges.

More than a few years ago, while Bernie was still in 8th grade, a Brother Frederick, who had my job at that time went to the Curtin home here in the Bronx to recruit Bernie’s older brother for the Marist Brothers…his older brother declined that offer, but Bernie spoke up and said he would like to go instead…he soon left for Poughkeepsie and finished his 8th grade year at the Marist Juniorate and thus began his 82 year journey of living with and being a Marist Brother.

During those years, he filled many important positions for the Marist Brothers here in the U.S., in Mexico, in Rome, as well as more than 35 years as a Missionary in the Philippines. Wherever he served, he was fondly remembered as being a true Marist Brother, having a great devotion to Mary and to Marcellin Champagnat, our Founder, as well as not being afraid to be tough and demanding to ensure that his responsibilities were accomplished. As Brothers, we’ve often joked that in history there was the Steel Curtain, the Iron Curtain and Bernie Curtain and the toughest of all was Bernie.

His legacy in the Philippines continues to strive. During his time there, he established and administered a number of schools including ones in Holo, Manikiner, as well as our Marist Scholasticate. Like Champagnat, he often did so with nothing but a deep confidence in our Good Mother and great belief in his fellow Brothers.

When Bernie returned from the missions to retire in 1992, he became part of the Roselle Catholic Community and spent many more years volunteering in the school assisting in the Library and with supervisions. But as I came to see first hand, it was never really about the work, but rather about the relationships he had with so many people. Even doing the simplest of tasks such as supervising the hallway during lunchtime, he would get to know many students and faculty and allow them to get to know him.

Even after he fully retired and could no longer go to school each day, he still found ways to connect with young people. Every time I ran a pilgrimage with students or a service trip, he would come out to the parking lot of the school the morning we were leaving to see us off and wish the students well, he would tell them he would be praying for them, and also would always give us a little money to stop for ice cream somewhere during the trip. Little moments like that are memories those young people will never forget. How could a man over 90 still love and care about young people so much? For Bernie it was very easy…he was a Marist Brother. During his life, he impacted the lives of a countless number of students. Some of his former students from the Philippines were even here today to say goodbye.

In today’s world we have email, Facebook, Twitter, Instagram and others I probably don’t even know about yet that allows people to stay connected in this world…Bernie never sent an email in his life, but yet he was truly one of the most connected people I’ve ever known. Every year he would faithfully write hundreds of Christmas cards and likewise more cards for birthday’s and other significant events in the lives of so many he would continue to connect with.

Not only did Bernie remain very connected with many people from all of the places he lived and served as a Marist Brother, but that was mild in comparison to the deep love and connection that he always retained with his own family. I know he loved each of you deeply and always looked forward to your visits and phone calls. He was incredibly proud of his family and would often speak about you, as well as his own parents and siblings. Likewise, he was very proud of his Irish heritage.

Last spring I was talking with him about my own work in Vocations and asked him if he had any advice for young men that might be thinking of joining us today. He responded, “Tell them that to be a Marist Brother is to live a truly wonderful life. It is a life that connects you to so many people and allows you many opportunities to influence and impact others.”

Two nights ago on Christmas Eve, I had the chance to watch as I do every year the classic Christmas movie, “It’s A Wonderful Life.” Bernie didn’t need a Clarence to help him discover that he truly had lived a wonderful life, but like that classic movie, when we think of Bernie and continue to share stories of him, we too will be challenged to appreciate our own lives and be grateful for the many ways God allows each of us to impact the lives of others.

May His angels lead you, Bernie, into paradise and may our Good Mother and Marcellin be there to welcome you home and say to you, “Well done Good and Faithful servant. You really did live a wonderful life.”