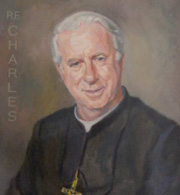 Brother Charles Howard, who was our Superior general from 1985 to 1993, passed away on Saturday 14 January 2012 in Campbelltown (Australia). He was 87 years old.

The lamp of his earthly life had been dimming little by little in the community of elder Brothers where he spent his last days. Presently, Charles’ lamp is eternally shining with the whole Marist community in heaven.

Bro Charles was born near Melbourne (Australia) on October 29, 1924. As a teenager, his family moved to Sydney. Charles studied at the Marist School, Randwick, and through his contact with the Brothers there he discovered his vocation. At 18, Charles received the religious Habit.

After some years of studies and formation, Br Charles ministered in various schools and in the juniorate at Mittagong. He excelled in his ministry through his intelligence and pedagogical know how. In 1961 he was sent to France to complete his religious formation. Returning to his country, he was appointed headmaster of St Joseph’s College, Sydney, a big centre with 1000 boarding-students. Charles proved to be a good leader with serenity, consultation, humor and compassion. In 1968 he pursued studies in catechetics at Louvain, Belgium. Subsequently, he went to Dublin, Ireland, for further studies in psychology.

In 1972, at 48 years of age, Br Charles was appointed Provincial. During this challenging post-Vatican II period he gave priority to pastoral work.

In 1968 he participated at the General Chapter as delegate; in 1976 he did so as Provincial. It was during this Chapter that Br Basilio Rueda was re-elected as Superior General. Br Charles was elected General Councilor. During the next 9 years, Br Charles had the chance to visit the Marist world. He was touched particularly by issues and implications arising from the call to social justice.

At the General Chapter of 1985, Br Charles was elected Superior General. Together with Br Benito Arbues, Vicar general, and the other Councilors, they determined the main priorities for their ministry leading the Institute. These priorities are beautifully reflected in the Circulars Br Charles wrote:

The new Constitutions, adapted to the Council requirements, were approved. Br. Charles encouraged the Brothers to pray them, love them, and live them. (Circular Our new Constitutions, 1986).
Vocations– Based on a serious theological foundation, Bro Charles encouraged Brothers and communities to commit themselves to vocation promotion, a field in which we are all responsible. (Circular Vocations, 1987).
Discernment was, for Bro Charles, a key attitude in the process of decision-taking, in our personal relationship with the Lord and in our personal growing. He invited all to personal and community discernment and promoted the Review of the Day. (Circular Discernment, 1988).
Meeting Champagnat. Since his youth Bro Charles felt attracted by the personality of the Founder and that experience consistently evolved in him. He began to see him as leader, friend, companion, and father. Based on his own experience, Br Charles challenged his Brothers to get closer to Marcellin especially during the 200th anniversary of his birth. He invited all of us to be Champagnat today. (Circular The Founder challenges his Brothers, 1989).
Hope. At the end of the Champagnat Year, celebrated throughout the Institute, Br Charles launched a message of hope to all the Brothers. Addressing the big changes affecting our society, Br Charles unmasked false interpretations of hope and encouraged the Institute to live a genuine hope with serenity, audacity, patience and creativity. (Circular Sowers of hope, 1990).
Love for the poor. The issues of social justice were very much at the heart of Br Charles. He struggled to share his passion with the whole Institute out of fidelity to Champagnat and to our charism. During his mandate he established an international commission to deal with these topics. (Circular An urgent appeal: Sollicitudo Rei Socialis, 1990).
Laity. Br. Charles referred to our time as the era of Laity. Therefore he fostered the openness of the Marist charism and mission to the world of lay people. He launched and promoted the Champagnat Movement of the Marist Family. (Circular The Champagnat Movement of the Marist Family, 1991).
Marist Apostolic Spirituality. In Br Charles there had always been an inner desire to unify and harmonize his own life and the life of his brothers. His response to this desire emerged through a deepening of Marist Apostolic Spirituality, a deepening that encompassed consecration and mission, prayer life and community life. (Circular Marist Apostolic Spirituality, 1992 y 1993).

Major undertakings for Br Charles during his mandate included the creation of the International Finance Commission, the new Marist presence in Eastern Europe and the establishment of international scholasticates for Africa (MIC) and for Asia (MAPAC). Charles paid a visit to our Brothers in China and also participated in the Synod Pastores dabo vobis.

After his Generalate was over, Br Charles, then 69, was still strong and dynamic. He spent years in two novitiates: Kutama (Africa) and Lomeri (Pacific). He was the delegate Visitor for the Sector of India. When his memory started to fail, he came back to his Province living in different communities. Finally, he went to Campbelltown, where he had been receiving medical care until his death.

I invite all the Marists of Champagnat to join me in a thanksgiving to God for the marvelous gift of Br Charles’ life and vocation. He coined the expression “To be Champagnat today”. And this is what he really was for all of us; a heartfelt Marist, a truly genuine son of Champagnat.

May this faithful Little Brother of Mary rest in the peace of the Lord!