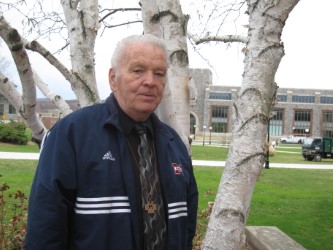 Over the years I’ve been taught by many Marist Brothers that “YOU CAN NEVER MAKE A MISTAKE BY BEING KIND AND CHARITABLE TO OTHERS.” This teaching was done not by word but through example.  Don was one of those Brothers who taught me this.  He was one of the kindest and most thoughtful people I’ve ever met. I know that many of you are here today because you were the recipient of his love. Thank you for joining us at Mass this morning.

On Friday, July 29, just a few days before Don died I went to visit him and we went to lunch at Rossi’s.** While we were driving back to Don’s residence at Marist College I asked him what his plans were for the afternoon. He told me that he was going to the hospital which I thought was a good idea as he had been ill and might have been going to see a doctor. But he told me that he was going to visit the father of a girl he had once tutored. The father had fallen down the stairs and was badly hurt. Visiting the sick was part of Don’s routine. He had visited the girl’s father the previous evening and was going to see him again. Don cared more about others than he did for himself.

Don had a rough demeanor at times but he was always sensitive to the needs of others. He had a golden heart. His physical appearance camouflaged his compassionate and giving soul. He could be stubborn and even obnoxious at times like one of the times I took him for a 3:15PM appointment with Doctor Kalapatapu, we call him Doctor K. When 3:20 rolled around Don said, “Let’s go home; we had a 3:15 appointment and it is now 3:20.” I told him that he could walk home if he wanted to but I would prefer to wait.  He told me that when a teacher is five minutes late the students are free to leave the classroom. I had to remind him that we were not in a classroom. PhD and MD have different schedules! So, the door soon opened and Don met with Doctor K and he told me he really liked the doctor. By the way, Dr. K, is also my doctor and when I go for my appointments with him he asks about Don.

Underneath his external appearance and actions was the real Donald that we grew to understand and appreciate sometimes with great patience and effort.

Don seemed to always have a scheme or a plan up his sleeve, a sort of a Play Book. He could not tolerate phony people and he called a “spade a spade”. However, I again witnessed forgiveness and kindness in Don. After all, dirty spades could be cleaned.

Don was personally responsible for changing the lives of many people in positive ways. (You have heard many accounts of his kindness and generosity in the past few days). However, I believe that he was personally responsible for the demise of Pan American Airlines. Here’s where his Play Book comes in! We all know about semester breaks and college schedules, right? Well, this is just one example of Don’s Play Book for those breaks. Using his PhD Math mind he would somehow figure out which airline flights would be overbooked and he would purchase a round trip ticket for those flights and then volunteer to give up his seat to another passenger in exchange for cash and a voucher for another flight etc. You know how the system works. Long story short, Don ended up with four round trips tickets on Pan American Airlines anywhere in the world where they flew. That’s how I was able to fly to Argentina and stay there a full month with our Brothers there. Bro. Joseph Maura went to Israel. Don’s sister went to….. Not too long after Pan Am went belly up! (NYC, MIAMI, LA, HONOLULU…world)

Not all his Play Book plans worked so well. He once picked up Bro. Marcos Longoria and me to bring us from Kennedy Airport to Marist College for an FMS assembly; on the way he was boasting of buying four good used tires for $5.00 each. Why spend so much for new ones, everyone is out to overcharge you anyway! We had at least one flat tire on our way to Poughkeepsie. I dared to tell Don that good people have to make a living too.

Don and I met for the first time in August of 1957 when we entered the Marist Brothers Juniorate called Marist Preparatory in Esopus, NY; we began our journey and training as Marist Brothers. He was from Saint Helena’s High School in the Bronx and I was from Queens and had studied at St. Ann’s Academy in Manhattan which was later moved to Queens and became Archbishop Molloy High School. I had been in the Bronx once and I do not know if Don even set foot in Queens. We were high school sophomores and he became known as #97 and I was #18! There were so many of us and several of our Juniorate classmates are here today. We were so many in the Juniorate that in order to make things easier for Brother John Berchmans to make work assignment lists we became numbers instead of names. Our numbers had to be put on all our clothing before being sent to our laundry at Marist College where young Brothers washed them. In spite of us now being “Numbers” we got to know each other very well. If we lost points (demerits) #97 often was one of the highest scorers. High scores were not good.

Our families got to know each other during their visits to Esopus. **My eldest sister Dolores had a crush on Don but I did not tell him about it until after we took our vows.

Brother Stephen Urban was the Director of the Juniorate and he and Don locked horns many times. Brother Stephen was trying to teach us about silence, hard work, and diligence in studies and for some reason Don did not quite agree with Brother Stephen’s style. Remember #97 on the “lost points list”. So began the long saga of Don walking the road outside Brother’s window. It was a punishment but Don took it as a personal challenge. Don did not conform to all the rules, some of them quite Medieval. It became of tug of war between Brother Stephen and Don; in the process Don wore out at least two pairs of shoes and he often related this story but we don’t know who won the battle. However, that stubborn streak never left him. It could drive some of us crazy one day and grateful the next. One does not tame a stubborn Irishman!

Next Monday, August 15th would have been Don’s 55th  anniversary  as a Marist Brother. His determination and stubbornness along with help from Brother John Berchman and others helped him persevere.

Frank Sinatra was famous for singing his song “I DID I MY WAY”.  Don did many things God’s way but in his own way or style. Whenever he saw a needy person or a lonely person he tried to help them. I was sometimes painful to watch how he helped because sometimes his assessment of situations of need may have been inaccurate. But God knows!  God always knows how loving and charitable we are!

“WHEN THE SON OF MAN COMES AS KING, AND ALL THE ANGELS WITH HIM, HE WILL SIT ON HIS ROYAL THRONE, AND ALL EARTH’S PEOPLE WILL BE GATHERED AROUND HIM. THEN HE WILL DIVIDE THEM INTO TWO GROUPS, JUST AS A SHEPHERD SEPARATES THE SHEEP FROM THE GOATS: HE WILL PUT THE SHEEP ON HIS RIGHT AND THE GOATS ON HIS LEFT. THEN THE KING WILL SAY TO THE PEOPLE ON HIS RIGHT, ‘COME!  AND RECEIVE THE KINGDOM WHICH HAS BEEN PREPARED FOR YOU EVER SINCE THE CREATION OF THE WORLD. I WAS THIRSTY AND YOU GAVE ME TO DRINK; I WAS A STRANGER AND YOU RECEIVED ME INTO YOUR HOMES; NAKED AND YOU CLOTHED ME; I WAS SICK AND YOU CARED FOR ME, IN PRISON AND YOU VISITED ME.”

THE PLAY BOOK AND THE KINGDOM OF HEAVEN

Let us imagine Donald at the entrance Gate to Heaven when he meets Saint Peter. What do you think happened? Listen in to their conversation.

Donald: “I have a deal in my Playbook.”

Saint Peter: “What is a deal? What is this thing you call a Playbook?”

Donald: “Peter, you don’t know what a deal is? You’ll soon find out. And a Playbook is sort of like my bible; the Bible is the basis for my playbook.”

Saint Peter:  “So, tell me, what’s the final Play in that Playbook of yours?”

Donald: “Well Pete, I have a many very good friends that I’d like to meet up here someday. So, what do you say we make a deal. After all, it is the Year of Mercy.  It’s sort of like that Pan Am deal I pulled off some years back. Remember? You work the system.”

Saint Peter:  “That’s quite a deal you are making; what are the odds?”

Donald: Thanks Pete, and by the way are you sure you don’t have relatives in Parkchester?

The Marist Brothers thank Mr. & Mrs. Kelly for giving us your son.