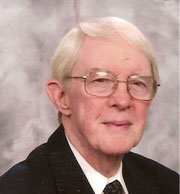 Thank you to everyone for being here today to pay tribute to our Brother Jim, to Jim’s family, his Brothers, William and Michael, their families, and the family of Jim’s dear sister Margaret who predeceased him…thank you for sharing Jim with us. The life of our Province has been enriched for having Jim with us for nearly 65 years.

Saint Marcellin Champagnat, founder of the Marist Brothers, loved young people and they found his enthusiasm and energy contagious. Three elements fueled his passion for life and shaped his spirituality: an awareness of God’s presence, an unwavering confidence in Mary and her protection, and the uncomplicated virtues of simplicity, modesty, and humility.

Father Duplay, a contemporary of Marcellin upon hearing of Marcellin’s death in 1840, said the following: “Marcellin’s lessons and example will not be lost; we shall find them in the Brothers whom he has founded.” The same can be said for our Brother, Jim. Jim was an intelligent, hardworking, thoughtful and compassionate man. His accomplishments speak eloquently of a ministry of educational leadership, which was firmly planted on the bedrock of faith, scholarship and professional competence. His studies in turn took him to Saint Ann’s Academy and Marist College and subsequently to the completion of graduate degrees at both Saint John’s University and Columbia University. As a teacher of English early in his career, Jim brought a vigor, a purpose, and an equity to the human adventure that is Catholic education.

Teaching and learning went hand in hand for Jim. The world around us was a classroom and life’s lessons were not some distant theory. We are always students…always learners…and our success depended not in thinking we have all the answer of life, but in becoming comfortable with the questions of life. A struggle though it was, it was a truth Jim held and lived his entire life.

In the early 1960’s into the 1970’s, Jim assumed administrative roles, first as Principal of Saint Agnes Boys High School then ultimately in the Archdiocesan Schools Office as Superintendent of Schools. The confidence in him and in his leadership was well-placed. In a climate of influence that could characterize such an office, Jim made his work one of dynamic service to people. He was an adept, decisive and innovative educational leader equal to the times and the challenges of those interdependent activities of a vast school system. His thinking and his actions always indicated a concern for quality education and equality of educational opportunity for children of different backgrounds and varying talents. His values spoke to that which is timeless. It was evident in the schools system, which he served so devotedly, and it was evident in his work with the various Boards on which he served—most notably the Marist College Board and the Lavelle School for the Blind Board.

A wise and trusted counselor and teacher, Jim gave Catholic educators who worked with him a clear understanding of the primary role of the Catholic school in the educational ministry of the Church. He was a staunch believer in setting and maintaining the highest standards of quality education and was an outspoken advocate of education for those on the margins. He lived by word and example the words of our Founder, Saint Marcellin: “In order to teach children you must first love them and love them all equally.”

Jim, as a Christian educator, was always true to his calling as a Marist Brother.

Our Marist Constitutions state that the three Marial virtues of humility, simplicity, and modesty come down to us from Marcellin. In a real way, these virtues put a stamp of authenticity and genuine concern on our relationships with our Brothers and with everyone we meet. When we hear these words, I think most of us understand the meaning of the words “modesty and humility.” We sometimes struggle with the word ‘simplicity.’ Marcellin always hoped that the quality which would define his “Little Brothers of Mary” would be simplicity. For Marcellin, simplicity was a straight-forwardness in relationships with others, enthusiasm for the work at hand, and an uncomplicated confidence in his God and in Mary. Like Marcellin, Jim was a man of simplicity. Whether as a teacher, a school administrator, a Board member/chair, or a superintendent of schools, Jim was a man of integrity, filled with enthusiasm for the jobs at hand, and always confident that his God would give him the graces necessary to do His will.

In a Bulletin of the Superintendents of Schools which announced Jim’s retirement from the Archdiocese, Jim offered a reflection on Mary, Our Good Mother. It was entitled Mary, Mother of Good Counsel. Part of his reflection stated the following: “Through word and example Mary was all her life a giver of good counsel. She encompassed in her being all the attributes of a loving, caring motherhood. She nurtured Him as an infant and a young child, worried when He seemed to be lost, encouraged Him in His Father’s work, suffered with Him in hours of His crucifixion, comforted, supported and counseled His disciples after His death.”

In a very real way, Jim followed Jesus in the Way of Mary…and over these many years he, too, offered good counsel to his family, friends, students, colleagues and his Marist Brothers.

May God continue to bless you and give you rest. May Mary, our Good Mother, and St. Marcellin Champagnat, our beloved founder, bring you to God and welcome you into paradise. I am sure God will say, “Welcome home, good and faithful servant. Well done!”