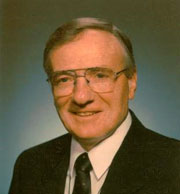 On behalf of the Marist Brothers, of the Pelham and Champagnat Hall communities, of the Mount St. Michael community, and of John’s sister Rita and brother-in-law Tim and the whole family, THANK YOU for being here this evening as we celebrate the life of our brother, uncle, friend John Peter Bantz. John requested that Millie and his niece Carol Lynn and myself say some words each at this Mass – representing in turn his friends, his family and his Marist Brothers. But he was quick to remind us that a eulogy is a TOAST – not a ROAST! And he gave us two conditions: 1st, be brief; and 2nd, be truthful – but not TOO truthful. Even as he was dying, John could make us laugh. And what a laugh he had!

John Bantz and I have been buddies for 56 years. What can I say about him in 8 or 9 minutes? You can see the brief outline of his biography in our Mass booklet. Each one of us here tonight has his or her own experiences of John which we’ve been sharing with one another these past few days – with a smile, with a tear. To me, John Bantz was the most loyal of friends.

And if John was your FRIEND, he was your friend for life – loyal to the end: Millie and Paul, Mike and Anne, Mike Flanigan, Leo, Kevin, Ken, Fr. Principe… I wish I could name you all, but you know who you are. How he loved you guys and told me so!

John was loyal to his MARIST BROTHERS – in particular, his profession group, the class of ’59. We chose John as our class president at Marist College back in 1960 – and, symbolically perhaps, he has remained our president every since.

And who could challenge John’s loyalty to his beloved MOUNT ST. MICHAEL? I don’t think John owned a sweater or sweatshirt without Mount St. Michael written on it. A freshman himself right here at the Mount back in 1952, John dedicated his heart and soul to improving the Mount during his 30 consecutive years of ministry here – first as Principal of the Jr. High beginning in 1984…then as Mount’s President for 9 years…and, more recently, in the Development Office. Br. Steve tells me what a helpful mentor he was. He had a practical, common sense approach to life and his work. John really loved so many of the Mount faculty, its staff and its students past & present – folks like Brothers Pat McGee, Linus Carroll, the Tricarios.

And what about loyalty to his beloved YANKEES? As often as not when I dropped by, he’d be listening to a Yankee game. It always amazed me that we became such good friends. Here was a man who excelled in hitting the ball, throwing the ball, kicking the ball, sinking the ball. He even competed as a young man in the Golden Gloves! All this as I was sitting in the library! And how many teams did he enthusiastically cheer on right here in this gym & on the track and playing fields!

In his later years, John took up golf – relishing his days on the links with Ken Gamble, Paul and others – and usually lamenting to Patsy and Charlotte his being outsmarted by that little blankety-blank white ball.

John was a worker in and out of school. He was loyal to our PELHAM HOSPITALITY HOUSE where he lived and served as host to hundreds of guests thru the years from all over the country and overseas. No job was too menial – making beds, food shopping, cleaning the house – or cooking each summer in Esopus for kids with cancer.

And – above all – loyalty to his GOD. John was a Marist Brother for 55 years – committed by vow to serving God and God’s people in the way of Mary. He didn’t wear his faith on his sleeve. He didn’t talk about his faith a lot. John LIVED his faith. He heeded the advice of St. Francis of Assisi – “Preach the good news at all times. If necessary, use words.” These past six months, John rediscovered the consolation of praying the rosary, and we prayed over and over again – “Holy Mary, Mother of God, pray for us sinners, now and at the hour of our death.”

Am I about to introduce John’s cause for canonization in Rome? Was he perfect? No. He was all too aware of his own human weaknesses – I assure you. When John made up his mind, he made up his mind. And not everyone stood up and cheered at the many decisions he had to make as a school administrator or provincial counselor. But one thing I know – once John Bantz was your friend, he was your friend for life.

How do we say goodbye to someone we love? We all admired John’s great courage these last six months as he battled cancer. John taught me how to die with dignity.

And he was no stranger to ill health. In the late 1960’s, while teaching at Cardinal Hayes and studying for a Master’s in math at Yeshiva University, doctors removed more than half his stomach. These past few weeks, he told me over and over again how grateful he felt to Maria and Sue, to Benson and to all the staff at Champagnat Hall who cared for him so lovingly and professionally. THANK YOU!

How do we say goodbye to someone we love? The Indian poet Tagore once wrote:

“SAY not in grief that he is no more, but say in thankfulness that he WAS. Death is not the extinguishing of a light but the putting out of the lamp because the dawn has come. (REPEAT) John’s dawn has come How often he spoke with me in recent weeks about the glorious reunion he would have with his beloved mother Alice, his Dad Pete, his brother Peter and so many other loved ones. And he expected his big buddies Br. Raoul & Br. Roy Mooney to be waiting at the pearly gates with a “splash” (A Marist code word for Scotch!)

John has now really earned his Mount diploma. He has graduated to his next level of life – eternal life. He is at peace in the loving arms of his God. How do we say goodbye to someone we love – even if it’s only a temporary goodbye? How thankful we are, John, for your extraordinary life and ministry. Gonna miss you – big time! “Go, YANKEES!”