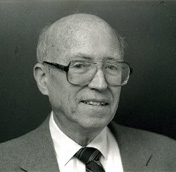 I am honored and privileged to represent the Province in presenting these remarks, and it is fitting that I should do so having been a student of Bro. Joseph at Marist College for three years, ending up with a minor in French. You called him Roland, but in 1943 when he took the Marist Habit, we called him Brother Joseph Emilian. Later it simply became “Joe Bel”. “Tout est grace”, a sentence Bro. Joe loved from the novel, Journal d’un Cure de Campagne by Georges Bernanos: “Everything is grace”, “All is grace”, or “Grace is everywhere”. Joe believed and lived this. He saw his life as a gift, a blessing. Coming form a strong family of faith, love, and closeness to each other, he learned community at home even in those brief yeas before he entered the Juniorate in Tyngsboro at age 13. It is no surprise that both families remained major forces, major loves, his whole life. He devoted his enormous energy to the building up of both. His frequent trips to family games of “45’s, or to baptisms, birthday parties, weddings and other family events attest to his strong family ties. His loved of community motivated him to call together the brothers living at Marist College on Wednesdays for prayer, dinner, and relaxation in his apartment, when the brothers moved out of St. Peter’s and into various locations on campus. Finally, his days at Champagnat Hall in the Bronx enabled him to find a blessing and a treasure living with some of our “greats”.

Like St. Marcellin, he was graced with “un Coeur sans frontiers”, a heart that knew no boundaries. He began the Marist Abroad Program so that Marist College students could see what existed beyond our borders. On a personal note, when I was in Rwanda, he convinced the Belanger family one Christmas to forgo giving each other Christmas gifts so that the money that would have been spent on gifts would go to help the students in our Marist school. He was conscious of where his former student was, and made the family aware as well. His year in China further expanded his horizons… And today, words of condolence and assurance of prayers form come from our general headquarters in Rome, where he is being remembered by the international community and our superior general: evidence of his global presence and effect on others.

Geographical boundaries were not the only ones he crossed…the world of ideas, art, cinema, you name it, knew no limits with him. Always, even in “retirement”, he had an enormous “to do” list. I wonder if he ever finished all he wanted to do. A man of no “in-betweens”, for him things were either “fantastic” (formidable), of “a disaster”. His mind, his desires, his plans, his visions, his heart, were truly unbounded. We were blessed to count him as brother for all these years. He has left a definite impact on all and an outlook on life worthy of emulation. In his own words at his 60th Jubilee, he said: “I hope to spend the rest of my days like Simeon and Anna in the temple, praying and serving. I remember daily the millions of hungry in our world of plenty and I pray for peace in our contentious and greedy world. Yes, original sin exists, but with Father Pierre Teihard de Chardin, SJ, we work daily to make a difference, to decrease chaos/evil, to increase cosmos/love. “In the final analysis, Saint Paul said it best, ‘We are treated…as poor, yet enriching many; as having nothing and yet possessing all things.’”. (2Cor 6:10)

Thank you, Joe, for enriching so many, so far and wide. Rest now in possession of eternal life. “TOUT EST GRACE”.