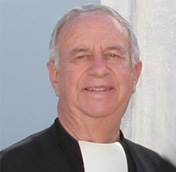 Eulogy at the Mass of Resurrection of Br. Ken Curtin

With this simple mantra, Ken often would call together a class, a prayer group, a brothers’ community, a group of friends. And, so, let me begin this reflection on Ken’s life with his mantra.

Today, let us remember Ken Curtin, a happy Marist Brother for fifty years, son of Elizabeth and Cornelius, son of Champagnat, son of the Church; a little Brother of Mary, a brother, a father figure, an uncle, a cousin, a teacher, a poet, a coach, a fan, a chaplain, a pastoral minister, a campus minister, a spiritual director, a Director of Admissions…but, truthfully…If you knew Ken, he much preferred to be known…as brother, and even more, friend.

I first met Ken back in my Contact Program retreat days; he was a young brother, and brother, he could talk. I remember his encouragement and his stories.

Every conversation would start. “I’m from da Bronx, baby.”..as he would say in the accent that neither time, nor geography, nor the Cubans of Miami could change. Born of Elizabeth and Cornelius Curtin, on March 11, 1945, Ken was always the treasured baby boy and son! Remember that big Irish smile, optimistic, self-assured, outgoing when others would shy away. His family was our family, and ours, his. He’d be the first to welcome any guest, first to begin shared prayer, first to start a discussion, and in recent years, first to have his eye glisten at a touching story. Ken Curtin was a brother without guile; he loved people.

First, Ken loved his mom and dad. He often cited their wisdom and how he loved times spent either at home, or at a Yankees game, or just being with family. How he loved his sisters, Nancy and Janey, and his Nancy, OP, and they loved him in return! ( On behalf of the Marist Brothers, thank you for all the love and care that you and your families showed Ken this year.) As only a proud brother could share, we all knew about you, and we were always asked to say a little prayer…for Janey, for Bill, for the family, for Nancy and for Evan, and of course, FOR THE NEPHEWS AND NIECE! Although you all were in Connecticut, you must know that you were also in Miami. You were the love and pride of your uncle. We knew of your high school events, your friends, your antics, your college classes, your jobs, your lives. Any time that he spent with you and your families, he treasured. He loved you and your family so very much!

I can only guess what Ken was like as a young brother and teacher. Around the age of 16, Ken entered the Marist Brothers in Esopus, NY described in our Marist Brothers’ Constitutions as, “he was chosen by God, called personally into the desert where God spoke to his heart. God set Ken apart and led him into a continuous process of conversion and growth in God’s love so that he could go on mission.” For Ken, Marist mission was to be immersed in our schools and with his students; from New York, to Manhasset, to Scotch Plains, to Esopus, to Bayonne, and finally to Miami. He loved teaching and would regale his students with stories of Camp Marist in New Hampshire, or his ministry the homeless ladies of the Westside of Manhattan and the theatrical community at St. Malachy’s, or even just the spirituality of the New York Yankees. He would invite his students to be part of the summer cancer camp at Esopus. Whatever his lesson, the core of his energy, the center of his mission always was focused to make Jesus known and loved by his kids “To make Jesus known and loved.” The Mission of the Marist Brothers.

If you knew Ken, you knew his many journeys into the desert; it might be with a one to one with a passing teacher, or a student who was in serious problems. Sometimes the deserts were more dramatic, an Easter retreat in West Palm, or Kergymas and Senior Encounters—always training youth leaders (some who have actually travelled here this night to say goodbye) who with his guidance and inspiration ‘hit the right mark.’ As he grew in his vocation, he committed himself to stay close to his God…be it Nemi di Roma with John Mcdee, as his Director, or Sangre di Cristo in New Mexico.

Ken would often introduce himself to his groups as Bro Ken. Yes, broken. He hungered to listen to the voice of God and live the spirit of God and complete his brokenness. And, when he returned, we all took a step closer to God through his stories, slides, photos, etc.

I suggest that it’s hard to detect or observe the clear transition when a young brother becomes a senior brother. We always say the kids keep us young. And, so Ken, in his heart and spirit, until about 13 months ago. Ken stayed forever young. He’d be the first to dance when the music started, and one of the last to leave always allowing for one more goodbye or one more conversation. Over ten years ago, I began to work with Ken in Miami…Miami and Columbus..one of the great love affairs of his life for the past twenty years. You Miamians must forgive him. Ken wanted nothing more in his last year than to return to 3000 SW Galloway, Christopher Columbus High School.… To be back with his community on King’s Creek… To hear the bells at St. John Neumann..to give embrasos and gossip outside of church….To have that one more glass of Malbec and share with a dear friend, or To sip a cafecito sitting around the table… To bring visitors around Columbus and tell all the stories of the Explorer victories and victors…and periodically, There is nothing he wanted more…he wanted to live and to live abundantly. Thank you all for the journeys that you took this past year, especially to you brothers, Kevin, Michael, Al, his community. And, thank you his dear friends for your visits, your calls, your care. Thank you to the caring Brothers at Champagnat Hall and the nurses and staff for always encouraging Ken and his family throughout this past year.

I can hear his voice yell at the team, “St. Marcellin Champagnat, pray for us: after a rousing pep talk to the Varsity Football team, or his quieter review of his spiritual classes and clients/directees with whom he journeyed at St. Thomas University. How he missed the brothers at Columbus, his old students from all around the province, his community where he loved to cook and entertain and to lead prayer as Director. How he loved to watch sports, especially if an alum was playing, like John Jay, one of HIS life leaders and now on the St. Louis Cardinals. How he wanted to share that story and stories of the hundreds, literally hundreds of alums, alumni parents, and friends that he adored. When I was re-assigned 5 years ago, Ken said to me….”How can you go? There is no other place to be. No family is like the Explorer family.”

You know that Ken never guessed that he would not return home 13 months ago. None of us did either. Ken attempted to live in and with Hope. Who among us would have had that stamina over these past thirteen months? This is his legacy to us tonight. Ken believed in the future. Let us receive this gift from him and commit ourselves to a future for our brotherhood and our lives and ministry together.

Before I ‘be still’, I think it is only right that we give Ken the last word in his eulogy. Last May, as part of an email, Ken wrote,

“I continue to thank God for answered prayers and I thank all of the kind people who have been praying for him…continued prayers will be very much appreciated. I am especially thankful for my two sisters Nancy & Janie, family members, the Brothers and nurses at Mt. St. Michael Academy and the numerous friends that are in touch on a regular basis. The past two days, I have had a wonderful visit from my friend Fr. Liam Quinn. God Bless you all…prayer & friendship, Br. Ken”

Prayer and friendship. Not in the past, but for the future.

Be Still and Know…that our Brother Ken is with God and therefore, he is with us.