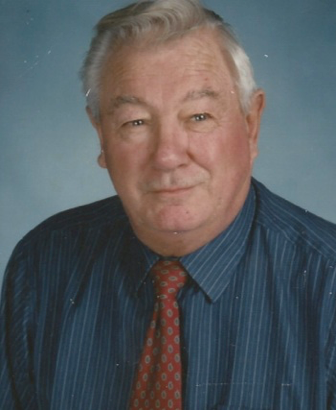 Given by Br. Dan O’Riordan

Good morning and on behalf of the Marist Brothers and the entire Lally family a sincere word of thanks for your being here today as we bid a fond farewell to a beloved brother, cousin, and friend. A special work of thanks to Fr. Bob and all at St. Mary’s parish for all they did over this past wee and always for us. Likewise to all of our concelebrating priests today, who helped make this liturgy such a fitting tribute to our Brother. To his family he was known as Billy and for the past 61 years to many, we knew him as Br. Pat. But regardless of what name we might remember him by, his laughter, his love, his humor, and the amazing person he was will always be with us.

I first got to know Pat, 35 years ago when I was on the freshman track team at Molloy. Although he did not teach or coach at the school at the time, he often would visit the track locker room to reconnect with his former fellow coaches, who he had worked with for many years. He introduced himself to me with a twinkle in his eye and said, “so I hear you lived in Ireland for a while?”….yes I told him and when I explained I had lived and gone to some of my schooling  in cork, he expressed his deep sympathy and went onto to explain how Galway was a much more dignified county…I was always grateful for that connection that we shared in having both done some of our schooling in Ireland….I was lucky enough many years later to work with him back at Molloy and again get to know him at a deeper level and come to appreciate even more his great sense of humor, his passion for life and now as I look back at his life 4 things quickly come to mind when I think of him.

The first is that he spent the past 61 year living happily and joyfully as a true Marist Brother. He touched the lives of countless students and profoundly influenced the lives of all the Brothers  and lay faculty members he worked with and lived with over these many  years. One of the songs that he choose for his own funeral today was the meditation song we just heard, “OUR LADY OF KNOCK”, I don’t think it is any small coincidence that as someone who grew up in the west of Ireland , living only a few miles from that famous Marian shrine, would one day dedicate their entire life to being a faithful member in the Society of Mary. A few ago, I was with him in France on a pilgrimage to where we as Marist Brothers started and I remember being incredibly struck by his deep faith and devotion to Mary during that trip. It was a side of him I had not yet known and one I am grateful to have witnessed because it has made my own faith stronger.

The second aspect of Pat’s life that comes to mind is the deep love he had for his fellow Marist Brothers. It has been said more than once over the past few days how He loved and enjoyed a good party…well many a Marist Brother will tell you that he was often the heart and soul of many Marist Parties. But beyond the good times, he was also always there for any brother who ever needed him. He loved his Brothers and they in turn loved him deeply. I know that we as a province owe a great deal of gratitude to Br. John Rahlie and Br. Rick Shea who lived with him in community here in Manhasset and were so faithful to him in these past few difficult months. Thanks to Maria Hughes and all our Province Medical staff who assisted Pat over these past few difficult months. Likewise to Br. Pat Hogan, who shared so many great life experiences with him and remained his closest friend and fellow troublemaker up to the very end.

Thirdly to his family both her in the USA and in his native home in Ireland. You were such an amazing part of his life and he loved each of you so dearly. He treasured the times he had with you and all the trips he made back to Ireland for visits. We the Marist Brothers are incredibly grateful for the gift of his life and know that much of who he was is because of the impact you continued to have on him

Lastly, When I think of Pat, I think of the word legacy. His legacy continues to live on in the lives of many young people he touched over the years….the other night on Christmas eve as I do every year, I watched the movie “it’s a wonderful life” which tells the story of George Baily and how he comes to realize just how many lives he impacted by his doing good quietly….

One of Pat’s former track runners, Steve Mantini, put an email out to his former teammates about Br. Pat passing. I would like to share a few of their responses …

Last night at the wake, a former student of mine came and shared the story about how his father was a student of Br. Pat’s when he had taught in Christ the king in the early 60’s. His dad entered the Marines after high school and always said that Br. Pat was tougher than any drill sergeant the marines ever had, but you always knew that no matter how tough he was , Br. Pat always had your back….

I believe that every person that Pat influenced knew he always had their back and wanted only the best for them….Many of them came last night to pay their respects…they continue to be part of his legacy.

And so now we journey with you Pat to your final resting place in Esopus. May the angels lead you into paradise after a long and well done journey.

May the road to Heaven rise to meet you.

May the Wind be always at your back.

And until we meet again, may our Lord and his good mother hold you in the palms of their hand.