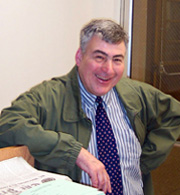 On behalf of the Marist Brothers, of Brother Owen and the Roselle Catholic community and of Raoul’s brother Robert, sister-in-law Arlene and the whole family, thanks for being here this evening. Last August, when Raoul began to realize he was dying, he asked me to say something at his Mass of Christian Burial. But he was quick to remind me that a eulogy was a toast – not a roast. And he gave me two conditions: 1st, be brief. And 2nd, be truthful – but not TOO truthful! Even as he was dying, Raoul could make me laugh.

How do you say goodbye to someone you love? Last night, as I sat in our little community chapel, the question kept coming to me: “What is God trying to tell us in the life and death of our brother Raoul?” What is our God saying to you and to me thru Raoul?” A medieval legend has it that when Jesus preached His Sermon on the Mount, he looked at a different disciple as He pronounced each beatitude. And the disciple on whom he focused was one who modeled that particular beatitude. When He came to “Blessed are the single-hearted for they shall see God,” it is said that Jesus looked at Nathaniel. Now it was Nathaniel, known as Bartholomew, who was the man without guile – straight forward…a straight shooter…and oh-so-single-hearted. I’m thinking tonight that Nathaniel will now find a soul mate when he meets our brother Raoul – our beloved, simple, straightforward, single-hearted friend.

When Alcoholics Anonymous celebrated its 50th anniversary, an AA member wrote his doctoral dissertation on the history and purpose of the organization; and he entitled it Not God (Not God.) For me, the simplicity of that title captures the spirit of our brother Raoul (who, just for the record, was NOT a member of AA.) Raoul’s life journey taught him humility as truth: Raoul let God be God…and he let you be you…and me be me. He accepted us just as we are. Raoul was who he was – gifted and broken like all of us…confident that His God loved him just the way he was. That’s why he was able to radiate such a rich simplicity, a warm and welcoming straight-forwardness, an uncomplicated and oh-so-positive way of living life, an upbeat single-heartedness…and a delightful sense of humor. Raoul was a gentle man … and a gentle giant of a Brother.

Raoul Joseph Molnar – or RAUL as his family calls him – was born on November 5th, 1940 in Brooklyn, NY to Celi and Rudy Molnar. He couldn’t have had more loving parents. He and his younger brother Robert grew up in a very happy home in Queens Village, NY. He attended St. Gerard Elementary School and was taught by the Sisters of Mercy. As a freshman at St. Ann’s Academy in Manhattan, he enjoyed and admired so much the happy young men in black robes (with the white index cards!) that he left home & joined the Marist Brothers Formation program at the age of 14 – 51% sure that this was what God wanted of him. (Some of you may have seen the short film” “Raoul Goes to the Juniorate” which the Brothers’ Vocation Director made that year.) So Raoul did his last 3 years of high school at Marist Prep in Esopus, NY.

Raoul always insisted it wasn’t so much the programs and training of his 8 years in formation that carried him through. It was his fun-loving, supportive young peers with whom he could be himself and belly laugh a lot – the notorious “Group of ’59!” Slowly he came to realize – the shoe fit. Raoul and the Marist Brothers were a match. And while growing into a community lifestyle, a celibate chastity, a challenging obedience, he confronted the human issues we all face. Raoul could be strong-willed – sometimes stubborn. And he hated being in situations beyond his control. These kept Raoul real – and grounded. Eventually he came to believe with his whole heart that, imperfect though he was, His God really did love him just as he was. From then on, Raoul always said he never once doubted his vocation in his 52 years as a Marist Brother.

Now I must confess – this is a shared eulogy. These past few days, some of you shared with me – so eloquently, humorously, lovingly, sometimes with tears in your eyes – the message God has communicated to you thru Raoul. Permit me to share a few of these:

You’re all aware of Raoul’s courage these past three years amidst great pain & suffering as he battled cancer. But you may not know that as a young man, studies didn’t come easy to him. So he worked twice as hard as his classmates at Marist College and earned his Bachelor’s degree in biology. He went on to study geology at the University of Notre Dame and earned a Master’s degree in guidance and counseling at Iona College.

Raoul was a classroom teacher and guidance counselor at Union Catholic HS in Scotch Plains for 12 years, then 21 years at Marist HS in Bayonne. And finally, for the past 14 years at Roselle Catholic HS. Except for six months off to do a Marist spiritual renewal program in Fribourg, Switzerland and a year serving as our province vocation director, he never left the classroom or the guidance office. Very few Marist Brothers have had a longer teaching career. And why was Raoul so successful and loved by his students? Our Founder, St. Marcellin Champagnat, taught us: Quote: “To educate students properly, you must love them.” That was Raoul’s secret. How he loved you students! And you knew it! Raoul saw with the eye of the heart what was really important – his family and friends, his students and their parents, the high school staff, his Marist Brothers. In recent months, Dr. Heaney and the staff members at Sloane-Kettering & nurse Veronica and the whole staff at Champagnat Hall & Hospice who cared so well for him told me they have rarely experienced a more patient patient – tell-it-like-it-is, Oh Yes, but cooperative and gentle and funny. And last week as Raoul lie dying, he said to me; “John, I’m not afraid to die. My only concern is the pain I’m causing my family.”

II. Raoul was a passionate man:

Passionate about his family. How he loved you, Robert and Arlene, Terry and Chrissy and Paul…and all his grandnephews and nieces. He was so proud of each one of you. Raoul was passionate about his friends. Republican or Democrat … liberal or conservative .. it really didn’t matter that much to him. How often he’d humbly say: “Edmund you’re so intelligent. I can’t believe you’re my friend.” “John Bantz, you’re so “atha-letic.” I can’t believe you’re’ my friend.” “Phil Robert, you’re so spiritual, I can’t believe you’re my friend.” How he loved his many friends and told us so over and over again. The Roselle Catholic faculty & staff & parents. His priest friends. Often, he’d say: “Gotta hang up. The Cranford ladies are coming.” Raoul could make us laugh – and often he did just that without even meaning to.

Raoul was passionate about hospitality. When I visited, I could never get my coat off before he’d ask: “What can I get you?” He loved a good party. He loved to cook. He loved to eat. And he loved a “splash”- as his friend Br. Vincent Damian used to call a cocktail. Raoul spent 21 summers in the Esopus Retreat House kitchen – cooking each week for 100 to 150 kids – kids with cancer, kids with AIDS, mentally-challenged kids, all sorts of kids. Very often the temperature in that kitchen broke 100 degrees. And Raoul’s recreation was reading the NY Times from cover to cover each day or walking the Atlantic City boardwalk, visiting what he liked to call “the shrines.” And how he loved to tease you, Arlene – and to call Terry and Chrissy “Princess.”

Raoul was passionate about his God. How often he’d say: “I don’t pray enough!” But he wouldn’t dream of missing the Divine Office and his meditation on each day’s Mass readings. Raoul spoke more openly than anyone I know about his relationship with his God… about his doubts and struggles, and how God spoiled him rotten. Saturday afternoons, you’d find him at the 3:30 Mass at Overlook Hospital in Summit (Saint Overlook, he’d say!) – carrying, of course, at least 3 prayer books and missals under his arm. It was Raoul’s faithfulness to prayer and very positive outlook on life that fortified him to be a man for others – doing ordinary things with extraordinary love:

Just shy of 50 years teaching and counseling high school students. Mothers Club meetings & events year after year after year. Working flea markets on Saturday mornings. Weekend retreats in Esopus. Coordinating ACT, SAT, TOEFEL examinations. Telephoning and looking in on shut-ins and the hospitalized. Secretary at the Brothers’ Provincial Chapters. The list goes on and on. And – as you can see – I could go on and on talking about my best Brother friend for the past 50 years. Can’t you just hear Raoul saying: “John, for God’s sake – enough already. These people need to get home!” So I’ll end with a few lines from a letter written to Brother Raoul in recent days by a former student of his. You can check out tributes and memories from other students on Facebook.

“Dear Brother Raoul, What can I say about the impact you had on me and our Roselle Catholic community? I always remember how so many people enjoyed your cooking, and all the girls said how cute you were. I remember how you were always willing to lend a hand when others needed help. You helped me get so much stronger, Brother. Your constant smile, your cheerful personality and, simply, your humanness, always found its way into my heart. We have so many memories that I cherish Br. Raoul – be it the time I nearly ran over you in the hallway, or sitting down and talking with you about all sorts of things, or watching you act silly to keep your class interesting, or your funny responses to a less-than-attentive student: “What – are you on meth?!” “Sweet, Jesus!” I’m so grateful I got to know you, Brother Raoul. I hope to be able to be like you someday. Every time I go running with my brother, we offer a prayer, and I never fail to think of you – always praying for us students. I know that you’re now in a safe and peaceful place and that you know the beauty of God’s plan. There’s a line from “Les Mis:” “When we meet someone we love, we see the face of God.” Thanks for that, Brother.” And the student signed his name.

How do you say goodbye to someone you love? Gonna miss you, Raoul – big time! Rest in peace, Saint Raoul. You’ve earned it.