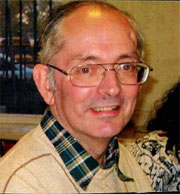 Our American Marists were saddened to learn yesterday afternoon of the sudden death of Brother Richard LaRose, a native of Lawrence, and a graduate of Central Catholic, class of 1958. He entered St. Joseph Novitiate the September after his graduation and was a novice there when I was a postulant. He went on to a Doctorate in Chemistry, taught in various Marist schools here and in Japan and at Austin Prep. He had a serious heart attack while in Japan, but recovered enough to keep on working. He suffered a major set-back from a fall from a ladder while changing a light bulb when he was visiting a Capuchin friend at his mission in Montana. He worked at Central Catholic until a series of mini-strokes forced him to retire. It was downhill until a heart attack yesterday allowed him to return to the Father.

We as a province are grateful to God for Brother Richard, whose wit, and daring added so much to our Marist life and the schools where he taught. He was only in his early ’70’s, but his death was a blessing as his memory faded and left him unaware of what was happening around him. Over the 53 years he was a Brother, he influenced countless lives, and, evidently, God saw that it was time to “come home.” It makes us all pause and reflect on the brevity of our fragile lives, and of the need to, as was often repeated to us, “live each moment as if it were our last, for we know not the day nor the hour.” Everything we do can and does have an effect on others, let us live in the confidence that even the simplest things add up to a life of service in some form, to others.