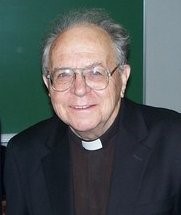 How do you speak about a man you have so much respect and appreciation what do you say? Br. Richard, I hope my words do you justice and give you the recognition you well-deserve.

I didn’t know Br. Richard when he conducted the music and taught singing at St. Josephs Novitiate and Marist College. Br. Richard was very talented – he played the piano, the accordion and the organ. These talents brought much joy to many at different functions. He loved to play the piano, and singing along with all of his friends.

I didn’t know Br. Richard when he was in charge of Bingo at St Stevens in New York City.

I didn’t know Br. Richard when he taught at Pace College or was the principal at St Agnes High School.

I didn’t know Br. Richard when he taught Philosophy, Spanish, Intro to Computer Science, Math and Theology and held at least two PHD’s for more than 40 collective years at Marist College as he referred to Marist College as “the Harvard on the Hudson”.

I didn’t know Br. Richard when he lived on the 9th floor of the Champagnat Building at Marist College, which he called his Penthouse.

I didn’t know Br. Richard when he was the chaplain of the football and the basketball teams at Marist College.

Many of you knew that man and all the great and many achievements and talents. Unfortunately I did not know that man.

The man that I got to know was dedicated and committed to the Marist Mission. He was kind, generous and had a great sense of humor. That’s the man I got to know and love over the last few years at Champagnat Hall.

The man I knew was the man that took care of his Uncle Billy for years, driving back and forth from the College to New Hampshire several times a week. He told me that his Uncle Billy raised him and paid for his accordion lessons. When his Uncle Billy became sick, he was transferred to St. Patrick’s Nursing Home and he cared for him every day and he spoke to him on the phone at least twice a day. A few days before Uncle Billy passed away, I went to see him, went over his finances and he said to me “take care of my nephew, he’s a good man.” “I know he is,” I said to him. He passed away a few days later at a young age of 101. When I went over Uncle Billy’s finances with Br Richard, and all the money was given to all the respective parties, I told Br. Richard that I put the money into his account, and told him it was his money, he wanted to know how much it was, and after I told him he said “Wow, maybe I should take a vacation to Paris and get married.” That was his sense of humor.

When he was living at Champagnat Hall, he would always ask me where his money was and how much he had. He would sit down with me every day after lunch for weeks asking me the same questions. Br. Richard said to me, “Please make sure that the money goes to the Retired Marist Brothers, most of them are very good men.” That’s the man I know, always thinking of others and never himself.

The man I knew was the one I took to Camp Marist. During the six-hour drive, he would tell me stories on all the places he taught over and over and over again, I would never get tired of hearing the same stories. That’s when he told me how he got the name of Ziggy. He was in a play and the character was Ziggy and a song had the words ‘ziggity zigg’ in it, the name stuck with him for years.

The man I knew came over to the Mount gym to attend our annual 50/50 dinner dance. Br. Richard was on the dance floor all night long, dancing with everyone that wanted to dance with him. He was a great dancer, also.

The man I knew was the one I took over to the Mount bingo, where he played the accordion for the bingo players before bingo started. After he was done, he told me “I guess they didn’t like me, no one gave me a tip.” He also played bingo, and before the game started, he would pray that he would win and he did win several times. He would give half of his winnings to the Mount and told me to take half for the Monks… again, always thinking of others and never himself. That’s the man I knew.

The man I knew was at the Evening Dinner Theatre in Elmsford watching the performance of the Music Man, you can hear Br. Richard singing with the actors, the smile on his face during the show was priceless.

The man I knew brought music into many lives… everyone knew this, and people sang with him. He loved singing, you saw the happiness in his face, and he knew the words of all the songs, especially My Way and we all knew that Br. Richard did it his way for over 67 years as a Marist Brother.

A few months ago, I told Br. Richard that Dennis Murray was going to retire next year as President of Marist College, and his response to me was a response that only he can say, “Maybe I should take over his job, take me over to the College now.” And he wasn’t kidding. That’s the man I knew.

The man I knew over the last year was the man I sat next to at Mass every day at Champagnat Hall. You could always hear him sing the Holy, Holy and saying the Our Father, showing the continuous devotion and dedication. I would ask him if he wanted to receive communion and he would always say yes and wanted to stand. I told him he could remain seated, but he wanted to stand and receive, showing his respect. That’s the man I knew.

I am sure that If Br. Richard knew what was going on around him, he would be thankful for the care he received at Champagnat Hall during his illness from the nurses, Maria and Sue, and from the aides, especially Colleen and all the Monks at the house. They all loved Ziggy and he repaid them with the joy he brought into their lives.

When I spoke to Bob Lynch, a good friend of Ziggy, employee at Marist College for many years and an affiliate of the Marist Brothers, he told me and I quote, “That Ziggy was a great story teller and how lucky you would be when you listened as he reflected on how the Marist Campus use to look in its early years. I admired his strong faith and love of philosophical debate. I think Ziggy always saw the good in his students, friends and brothers.”

Br. Richard, Ziggy, we all want you to enjoy heaven, enjoy being with your buddy Br. Joe Bell, and remember to pray for all of us.