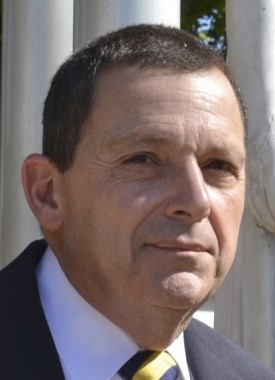 A Celebration of the life of Brother Richard Sharpe
Mary, Mother of the Church Parish
Brownsville, Texas
May 29, 2015

First, many thanks on behalf of Br. Ben Consigli, our Marist Brothers Provincial and the USA Province for this celebration of Brother Richard’s life. Our prayers and condolences to our Marist Brother communities here, as well as to Mrs. Lori Trott, Principal and the administration and faculty and staff at St. Joseph Academy, as well as the Board of Directors at St. Joe’s. Thanks also to our celebrants, Msgr. Bert Diez, Msgr. Gus Barrera, Fr. Tony O’Connor, Fr. Alex Flores and Deacon John Kinch. And, we appreciate the presence of our Marist Affiliates and the St. Joseph Academy parents and students.

In the past few days, I have been like you so very sad, shocked, mourning, and probably even a bit disturbed. Like you all here, I was not ready to say good-bye to Br. Richard. In fact, I flew in here last Wednesday hoping to have a catch up visit with Richard; only to find him semi-conscious in the hospital, and soon unconscious. And, with the brothers, we prayed our good-byes and memories with him.

But, I wasn’t ready to let him go, nor was his community of Marist Brothers, Michael, Francis, Donald, Paul and Albert; nor our brothers across the country, our leaders, Brothers Ben and Roy who are with us here tonight in spirit; not his family sisters and family, his friends. Especially, Mrs. Lori Trott and Mr. John Cowan, and all the administration and faculty, Board members, and parents and students and friends wanted to say good-bye. And, so tonight, we grieve and come here to say good-bye and let him rest in peace. We will meet again in the Kingdom of God. We await the time when we’ll be all together again to tell him all about our lives, our works, our successes, our disappointments. That day will come.

I’ve known Br. Richard for nearly 45 years when I first met him at Marist College, Poughkeepsie. Richard was a proud MOUNTAINEER from Wheeling, West Virginia. His parents Mayme and Frank sent him to the brothers at Central Catholic High School in Wheeling, WV, where he discovered his initial call to the Marist Brotherhood. He would follow that call to the Marist Juniorate and Novitiate, and brotherhood for almost 50 years ago.

In the last 45 years, he was quite a challenging teacher in Social Studies at Bayonne and Marist-Chicago; a very helpful Assistant Principal three times-at Mount –Bronx, St. Elizabeth-Oakland, and St Joe’s, a Principal twice at Bishop Carroll in Ebensburg PA and Lourdes-Poughkeepsie , and a school President twice, at Marist-Chicago and finally here at St. Joe’s. I think you’d all agree that’s an impressive resume. Richard was a true Marist educator.

He poured himself into each of his ministries wholeheartedly. He never looked back, although from an early age, Richard was no stranger to infirmity. Truth be told, Richard has had a surgical history that spans over 50 years. BUT, NEVER…did his personal business distract him from his ministry business….even these last days, his only desire was to return to his office at St. Joseph Academy. Thank you, Lori, and St. Joe family…you made the last years of his Marist life and ministry so very happy. Another special thanks to his close assistants and to all the members of his Cabinet and the Board of Directors. He respected you all and your work. Being President here was energizing lifeblood for him. He loved being a ‘bloodhound’. I hope he made you all proud as well.

In some ways, Richard reminded me of the Wisdom figure Job. Although Job was physically stripped health and family, and the devil was allowed to throw countless challenges at him, Job never stops praising God and never curses God for his lot. For those of us who knew Richard, in spite of all the challenges thrown his way in his health and ministries, NEVER did he question God. Instead, he accepted his call to be brother and to insist on being nothing but the best as well as demanding that from all around him. And, in utmost simplicity, Richard stayed close to his God, he accepted his call as a brother, and tried to live it with all his humanness.

YES….he did it with a flair! remember the young men at Mount St Michael would ask him, “Brother, is that an Armani suit?” And, Richard would show them the shopping bag from Barney’s-NY; of course, he had been to the annual sale. With ever present back problems, he used the clothes to keep him looking fit and ever stylish. Br. Don Bisson who was with him in Oakland reminded me, “His shirt at the end of the day looked better than ours at the beginning of the day! He never sweat and was always feeling cool. And, his classrooms, offices, and personal room…were always impeccable.”

Meanwhile back at the house…only a torn Notre Dame (his favorite alma mater) football shirt and athletic shorts from his recent school would be his dress. This served us well, as very often, he’d sneak into the Brothers’ kitchen at the end of a Friday at midnite in Lent and start grilling hamburgers and french fries for the brothers….and announce into the community……Brothers, y’uns come down, the abstinence if over.” He had all the cooking skills of a seasoned Italian grandmother…and he was fast and furious with a skillet…and produced pastas for armies of brothers and school parents.

Once, he cooked a meal in the Brothers’ house for the Mothers’ Club, that they all had eaten so many courses, that they had to go out and walk around the track. When they returned, they danced around him, and stuffed dollar bills into his shirt….this was way before Magic Mike…it was Richard who had the magic in the kitchen and with his Marist Family.

When, I first was assigned to Chicago, I entered the community room to find Richard playing and dancing with abandon to the song, “hooked on a feeling”. He truly was hooked. He loved the Marist way of life. He loved his teaching, his students, and his colleagues. He loved school intrigues and strategic planning. He loved to dance…be it in the discos of NYC, or a parent’s dance, or in Italian street festivals or on Bourbon Street in New Orleans. He loved music and fun (although he was constantly managing pain.) Constant back or stomach pain never stopped him. One time, in NY, we decided to take a fast trip to an Italian pastry shop in Manhattan from the Bronx. Who knew we’d run out of gas coming home….right in the middle of upper Manhattan. Luckily, we were on top of a hill and we had a shot to make it to a gas station about a mile away. Since I was driving…and had the plan…he had to push…and so there we were pushing a stalled car from Park Ave to the FDR Drive…of course, Richard running behind in his Armani trench coat….for fear of being mugged! Trust me, no shortage of adventures in his life.

Let’s remember Richard’s strong will (or should I say stubbornness?) If he had an idea! Remember, he was Italian! Don reminded me that when he had a heart attack 20 years ago, he refused to take an ambulance. He ordered Don to drive him. And, I know that continued right through the past 5 months here in Brownsville and the brothers had to learn Richard’s way of dealing with doctors and hospitals.

He’d share his pathos as with his love for the Opera, La Boheme. He was filled with compassion for any needy one- even just recently, he and the brothers added the lovely but very needy Missy, a rescue dog, to the community. As I began I quoted from the song, ‘See you again’. The song ends with the poignant verse,

So let the light guide your way,
hold every memory as you go
every road you take will always lead you home.

We will hold these memories of you Brother Richard, as you continue your journey home to be with Mary, our good mother, and our beloved Father Champagnat.

Rest in peace, our brother, my friend.

Richard is returning to the area where a significant part of his life as a Marist began…the Mid-Hudson Valley region. It’s in this area— where a little over 50 years ago—Richard went to the scholasticate at Marist College across the river in Poughkeepsie.

Born in West Virginia, educated at Central Catholic in Wheeling where he met the Marists, then off to Tyngsboro, MA and then to Poughkeepsie to finish his College education.

Richard spent almost 40 years as a school administrator—in Illinois, NY, California, Pennsylvania, and Texas. He was an assistant principal, principal, and president.

Those impressive stats really don’t speak of the man, though.

He had a wickedly, sly and dry sense of humor, he was a wonderful cook, and a welcoming host. He was highly perceptive and equally tolerant of others. He was personally prayerful and faithful in his vocation.

As Richard grew in the life, he mellowed somewhat. I think years of health challenges made Richard appreciate life more and accept his own limitations and those of others. He recognized that life (ALL of it) was gift. He was so appreciative of how the brothers cared for him, especially during these final months when Mike Williams would care for him and visit him during his hospitalizations.

I considered him a friend. During my 6 years as provincial, I would go to Brownsville, Texas….for vacation…in the summer. It was a place for me to get away, to relax, and to spend some time with Richard. He gave me plenty of space, but we always ended up in the evening sitting around, having a drink, talking about friends, family, work and our brotherhood. We were able to laugh easily. I guess I will miss that the most.

Richard has earned his right to his rest…and here on this tranquil and beautiful property, Richard will be with his community of brothers (especially with his good friend and group mate Vito Aresto). We can certainly say without question that Richard has fought the good fight—he has finished the race and he has kept his faith. Thank you, Richard, and may God grant you much peace.