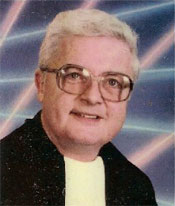 “All to Jesus through Mary, All to Mary for Jesus.” The English word “all” is a very deceptive one. It is only three letters, one syllable, and yet it is packed with an incredible challenge. How easier it would be if the motto could be “’some” to Jesus and Mary and the rest I will hold on to.” No, the motto makes it clear, it is “all,” a complete and total surrender to the Son of God through the loving heart of his mother, Mary.

Jesus, of course, is the model of complete and total surrender to the heavenly Father. Our gospel reading from John reminds us of this very clearly. Jesus said: “It is not my own will that I have come down from heaven, but to do the will of him who sent me.” In our own lives, we are indeed to imitate what the Son has done, and the reward for this will be to have eternal life.

Sometimes in our lives we are given the gift of meeting people who indeed give “all to Jesus” and who through their words and deeds seem to understand what is important in life. Brother Robert James was indeed such a man. He understood from an early age, through the strong Catholic upbringing that he received from his beloved parents Helen and Charles, that life means “giving all to Jesus.” He was able to surrender all because he knew the meaning of humility. He eventually allowed the words of the Founder to enter his heart deeply: “May humility and simplicity always be characteristic of the Little Brothers of Mary.” What Brother did on this earth was never to bring glory and honor to himself, but it was always directed toward the good of the other. He served Jesus and his Mother Mary by being a conscientious student, postulant, novice and scholastic. He was an intellect earning degrees in Spanish and theology. He would eventually move on to being an important part in the formation of so many young Brothers, and later becoming Principal and Assistant Principal in Marist schools in Bayonne, Roselle, and Newark.

But of all the roles that Brother assumed, the one that I believe characterized him best was that of being “teacher.” It was in this role that Brother indeed gave all to Jesus through Mary. He held nothing back. In the time that I knew Brother as my Spanish teacher at Marist High School in Bayonne in the late 1970s and early 80s, we did not have the conveniences of smart boards, the internet, web searches, power point, and the like. Brother’s methodology consisted of simple yet effective teaching tools: chalk and a blackboard; a flawless penmanship; a raised eyebrow that could handle any disciplinary matter; the ability to run up and down the aisles to ensure that all students were on task; a ten point daily quiz that was actually graded and returned the very next day; and a lesson plan that was more detailed and thorough than a college student’s master’s thesis. And, in the midst of all of this academic background, we also came to know Brother in two other ways: first we saw Brother as a deeply spiritual and prayerful man, with a particular devotion to the Blessed Mother; and second, we knew that in addition to all that he did for us in the classroom – literally through his body, mind, and soul – he loved us as if we were his very own sons. I think Saint Marcellin Champagnat would be proud.

Yes, Brother Robert James will always be a teacher in my mind. Even in these later years when his Parkinsons and other complications made the body feel like a tremendous weight, he bore it with such grace and dignity. Even in these years Brother continued to be a teacher showing us that we are still called to give “all to Jesus” even when life can seem difficult or even burdensome. The sufferings that he shared were a participation in the passion and death of our Lord, and will have, as our faith teaches us, a real redemptive value for you and me and for the entire world. Not a bad legacy to leave as a teacher.

As we continue to celebrate this liturgy, and reflect on the meaning of the life of Brother Robert James, let us imagine for a moment the point of meeting in the heavenly kingdom when Saint Marcellin Chamapagnat and Brother Robert James meet. I think Marcellin would say to “R.J.” these words which are a paraphrase of Marcellin’s own spiritual testament:

“My dear Brother, – Robert James -, you were faithful to your vocation, you loved it and you persevered courageously. You maintained a great spirit of poverty and detachment from earthly things. Your daily living of our Rule preserved you from every failing in that vow which bound you to the fairest of virtues, and the frailest. There were difficulties in leading the life of a good religious, but the grace of God made all things easy; Jesus and Mary came to your aid. How consoling it is, when you will appear before God, to know that you have lived under the protection of Mary and in her Society! Our good Mother kept you safe, gave you increase and brought you to holiness. You were a holy teacher, a good and faithful servant, a steward of the mysteries of God. Welcome home!” Brother Robert James, ruega por nosotros…pray for us.

N.B. This was my very first funeral liturgy as a priest as I was only ordained a priest for the Archdiocese of Newark two weeks before Brother Robert James’ death. Hence, even unto death Brother served as “teacher” to me. His prayerful influence was a tremendous support to my priestly vocation. Rest in peace, my teacher and friend, Brother Robert James.