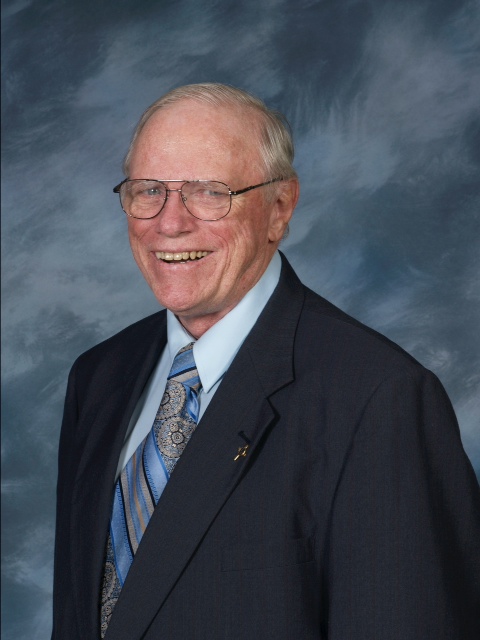 Brother Tom came to Laredo in 1972 and taught Math at St. Joseph Academy. The school closed at the end of the year and was sold to the Public School system. Tom chose to enter the Public School system so as to help the most needy kids. His first classroom that year happened to be exactly where his bedroom had been in the dormitory part of the school. He found himself very sleepy in the afternoon, no doubt due to the location.

Brother Tom possessed a prayerful, kind and generous heart. He always placed others ahead of himself. God was first in his life. His religious community, family, students and needy were close to his heart. In the more than 40 years in Laredo, stories about Tom are numerous and funny and probably true, but they all indicate the kind and loving character that he was.

Sunday mornings over those years were reserved for spending time on the phone with his sister, Rita, and cousin, Sr. Margaret. They were very special in his life.

When I bought United Airline ticket to come to New York for the funeral, the airline agent told me she had had Brother Tom for her math teacher. “He made Algebra so much fun and easy to learn.” She had tears in her eyes as she finished preparing my flight ticket.

Tom was given the slowest and neediest kids in his Math classes. His principal knew he worked best with them. He had a gift for holding their attention and getting results with them. One year, Tom found out he had a gang leader in class. Some of the students were not doing their assignments or homework, so this student told Bro. Tom: “You teach them, I’ll make them do their work,” and he did. He walked around the classroom and made them listen and write. Years later, Tom met some of these students at a wake and reminded Tom about that class they had attended.

Tom worked late after school hours to help kids with assignments and make up work to help them get passing grades. At home, Tom would frequently call on me to talk on the phone to some parents in Spanish to find out why their son or daughter were not turning in their assignments, and how they could help them

Brother Tom spent about five weeks of volunteer cooking during the summer for some 33 years at the Esopus Summer Camps for disadvantaged children. He is well remembered for his baking of cookies, cakes, and other pastries and desserts. They tell of how some of the children would help in shaping and handling the dough in ways that might not be appetizing; and Tom would thank and praise the children for their help and then send them off. He would prepare another batch of dough and bake those instead. The children thought they were eating the cookies they had prepared and were very happy to have helped make them.

After retiring from the Public School, Tom taught adult religion courses for the Diocese of Laredo and Corpus Christi, as well as for the parish of San Martin de Porres. He taught religion classes to middle and high school students. He also organized retreats for all the students of the parish. Everyone looked forward to his classes because every week Tom would bake brownies for his students. He even taught the First Communion class how to bake bread for their Mass.

Tom had a Guidance Counselor degree and helped numberless people. With some of them he would meet in a classroom at church, spend hours on the phone talking with them. He always had time for them and anyone in need.

Tom made frequent hospital visits to sick people he knew, and brought holy communion to them or to others at home who had requested it.

It was Tom who three years ago drove me to San Antonio and back (a 300 mile round trip) for one and a half years for my eye treatments, transplant and check ups with my doctor. Yes, he loved to drive in Texas.

Marvin Gollick came to Laredo around 1985. He was a street person who came almost daily to our house early in the morning. As soon as a light went on, Marvin would ring the doorbell and say to Brother Tom: “Got any coffee in there?” Tom would prepare him a cup of coffee and sometimes a plate of something to eat from leftovers. A few years ago, Marvin ended up in a nursing home in San Antonio and Tom made it a point to drive up there to visit him and take him out to lunch every Friday. This lasted almost two years then Marvin died around 2010 and was cremated.

Tom was known for his skill in cooking. He was the chief cook in our community. His meals were very good and he took great pride in his variety of different preparations. His meals were always in good taste. Feasts and holidays were always very special. He is well remembered also for his cinnamon bread made at Christmas time. He would bake at least 120 loaves for his teacher friends, doctors and other friends of the community.

The time came when we felt Tom needed more medical attention at home and the Lord arranged things so that Tom could benefit from the nursing care available at Champagnat Hall in New York. Tom’s heart was really becoming a serious problem. He had given of himself for years, and now it was time for him to receive help and assistance. Thank you Champagnat Hall Staff for all the loving care and concern you gave to him. We will miss him, but will always remember his special smile.

I am here today in person representing perhaps several hundred people who would have loved to be here themselves to pay their respect and honor to Brother Tom. All knew him as a Brother, educator and friend. With 40 years of dedicated work in Laredo, Brother Tom leaves many people with a heavy heart. May he rest in peace.