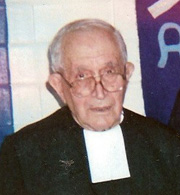 Our Marist Spirituality document, WATER FROM THE ROCK, gives us some insight into our Brother Jubilarians: “Led by the Spirit, Saint Marcellin Champagnat was seized by the love that Jesus and Mary had for him and for others. His experience of this love, as well as his openness to events and to people, is the wellspring of his spirituality and of his apostolic zeal. It made him sensitive to the needs of his times, especially to the ignorance concerning religion among young people and the poor circumstances in which they were placed.”

We know that Marcellin loved young people, and they found his enthusiasm and energy contagious. Three elements fueled his passion for life and shaped his spirituality: an awareness of God’s presence, an unwavering confidence in Mary and her protection, and the two uncomplicated virtues of simplicity and humility.

The same can be said for our Brother Jubilarians. The religious lives of the men we honor here today span some 80, 75, 70, 60, 50 and25 years of service to the young people who have been entrusted to their care. We as a Province of Marist Brothers are truly blessed.

It has been a pretty remarkable span of time by any standards. Without question, there have been ups and downs, joys and sorrows, doubts and certainties—I’m sure more than enough for a lifetime—but today we celebrate the generous response of these men to Jesus’ call to “come follow me.”

Father Duplay, a parish priest and contemporary of Marcellin upon hearing of Marcellin’s death in 1840 said the following: “Marcellin’s lessons and example will not be lost; we shall find them in the Brothers whom he has founded.”

Marcellin once wrote that someone who wished to embrace religious life needs the following qualities: “…self-renunciation… great openness of heart, a persevering spirit and a real desire to love God as Mary did…”[1]Brother Valerian fits the bill perfectly. Teacher, Tutor, Camp prefect, computer instructor…but most importantly BROTHER, Val has been a Marist Brother for 80 years. His life as a Brother almost encapsulates the history of the Province of the US which was founded 100 years ago. He continues to live his brotherhood with everyone he meets and his “great openness of heart” has led many “to Jesus through Mary.”

Brother Jean Baptiste, one of the earliest biographers of Marcellin, said that Marcellin’s disposition “was bright, open, frank, resolute, courageous, enthusiastic, constant, and equable…” [2] As a “Little Brother of Mary,” Val reflected Marcellin’s disposition in his own life. Thank you, Val, for enriching our lives and the life of the Province.

This past year, 2011, Brother Valerian Doiron celebrated his 80th year as a Marist Brother, a life of loving faith.

Born in 1913 in St. Alexis, Quebec, Canada, “Val” moved with his family to Westbrook ME when he was 10 years old. In 1929 a friend told him he was going away to become a Blessed Sacrament Father. Another close friend, Joseph Desroches, confided he was going to Poughkeepsie NY to become a Marist Brother. This sparked Valerian’s adventuresome spirit and he decided to head for Poughkeepsie, too, to “come and see” what the Lord might have in store for him there.

While Joseph withdrew from the program a year later, Val noted that he had been blessed with decades of happiness from teaching math to countless junior and senior high school students in Manchester NH, New York City, Augusta GA and Lowell MA; helped direct an arts and crafts program at Camp Marist in NH; and endured the ups and downs of being a lifelong Red Sox fan.

Asked about a favorite pastime, Val remembered creating and giving away candles of all sizes, shapes and colors during his summers at Camp Marist while also focused on motivating his math students to excel in their studies from September to June.

Mischievously Val remembered participating in an international renewal course for Marist Brothers at St. Quenton Fallavier, France in 1952. Although told not to take in the sights of Rome before returning home, he and his confreres gleefully did so and lived to tell the tale.

In his 98th year, despite what he had characterized as poor eyesight, an occasional upset stomach and some early-morning dizziness, Val was quite happy living in the Marist Brothers retirement and assisted living community in the Bronx. With the aid of his trusty cane he would resolutely make his way around the residence each day, especially for daily Mass, hearty meals and a therapy program that kept his arms and legs in shape. Having just celebrated 80 years as a Marist Brother, our Brother Valerian entered eternal life on December 8, 2011, the Feast of the Immaculate Conception.