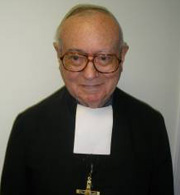 A Molotov Cocktail who could erupt one minute and the next be calm; a linguist who excelled with brilliance not only in French, English and Italian, and, of course, Spanish; a capable “organizer” whose Annual Canned Food Drive would meet with success; a diligent educator who for well over 30 years led student summer trips to Spain; in recent years as a Brother with dementia in Champagnat Hall who could still often recognize a kind act by his care-giver and yet utter “Thank You”. These are but a few characteristics that bespeak the man – Brother Victor Serna.

Born in Spain 87 years ago, when he was just nine days short of his 14th birthday, he left home and entered the Juniorate of Our Lady of the Angels to become a Marist Brother. On August 2, 1940 he became a Novice at a Novitiate in France and, afterwards, due to World War II, transferred to Grugliano, Italy to attend the “International” Training Center where upon completion of his studies he could be sent by the Superior General anywhere in the world where needed; this generosity on his part “missioned” him in August 1943 to the Marist School in Cienfuego, Cuba which would cover a 12 year ministry. In June 1950 he had already earned his Ph.D. degree from the University of Havana where in one of his classes he sat adjacent to a certain Fidel Castro; they became friends. Later, when Victor became editor of the Cuban Province Bulletin, Fidel would be a speaker or guest at some events. Little did Brother Victor ever expect that in 1961 Castro would take over all of our Cuban Schools, round up the Brothers (including Victor) and fly them out of Cuba. After a few months in Central America, he then came to teach at St. Joseph’s Academy, Brownsville, Texas and then in 1965 transferred to teach Religion and Spanish at St. Mary’s High School, Manhasset covering a span of 39 years. A remarkable achievement for him during that time was to obtain a New York University M.A. Degree in English in 1973 since he could not obtain his records from Cuba.

An avid reader with a fascination for current world events, Vic would spend all day Saturday in the library or Barnes & Noble bookstore in Manhasset; Sundays, even in winter, would find him walking 5 to 10 miles at a clip.

However, this bright educator who knew the structure of the English language better than we, could also in his simplicity reflect a bit of naiveté. In 1995 when I joined the St. Mary’s community, I was welcomed with my cat Bo-Beau. The first night Bo-Beau got fed with ½ can of wet cat food and some dry cat food. The remainder ½ can was refrigerated. The next day when Vic was up from class and preparing his lunch, I found him in the kitchen holding the cat food can in one hand and a spoon in the other “What is this?”, he asked. When I replied “cat food”, he exclaimed a shout and threw it across the counter; he never noticed “cat food” marked clearly on the can.

Another time when about 30 Brothers were gathered at the Park Avenue Manhasset Community for a Labor Day barbecue a hilarious memorable moment developed. The previous day Brother Patrick Lally had spread some cow fertilizer on certain bushes and plants. Now while all seated, Vic preferred to stand, eat and walk around us. Depending on where he stood a breeze would hit him first and instantly stopping in his tracks would “turn up his nose.” Finally, after a few doses he yelled aloud with total dismay: “What is this smell?” We all howled with laughter and when informed he literally ran to the other side behind us and roared with his noted deep belly laugh. Still, another time when returning from Spain, I went to pick him up at Kennedy Airport. Well on time I stood at the designated gate; people emerged but no Victor; as I learned afterwards he and some others went out a side door and when he didn’t see me, hailed a taxi with an Arab-speaking driver who knew little of Nassau County’s roads; they couldn’t understand each other and rode around for over an hour; apparently even though he walked many distances, Victor didn’t recognize anything close to Manhasset. Finally, after a pay-phone call home at Brother Kenneth Robert’s direction did they reach home with my arriving five minutes later. Quite exasperated Victor suggested that I should remunerate him for the taxi fare.

He possessed the ability to think positively and frequently radiated a smile. And even though a complex person, Victor was a Marist Brother, faithful to community prayer; his fidelity to God, even in his illness, was borne out when he would ask over and over again, “What time is it?” or “What day is it?” but, repeatedly inquired “What time is Mass?”

So, Vic, dear Brother and friend, now and forever more as you rest in the peace of the Lord, may it be your Eternal Mass!