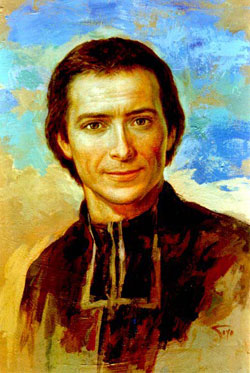 Marcellin Champagnat was born on May 20, 1789, the year of the French Revolution, and died on June 6, 1840. He was a Priest of the Society of Mary and the founder of the Marist Brothers, a congregation devoted to the education of neglected youth.

Champagnat left school at the age of seven. When he was fourteen he discovered, through the help of a Priest, his own vocation to the Priesthood. He began his studies again, almost from scratch.

Aware of his limitations (and against the advice of those around him) he entered the minor seminary and struggled to learn even basic subjects. As he worked through those difficult years, Marcellin never lost sight of the will of God for him and kept his eyes fixed on God’s call. One of his friends in the seminary was the future Curé of Ars, Jean-Marie Vianney.

On July 23, 1816, the day after his ordination, Champagnat and several companions went to the shrine at Fourvière in Lyon to pledge their commitment to establishing a Society of Mary in order to re-evangelize French society in the wake of the Revolution. While the other seminarians envisioned an all-encompassing society inclusive of Priests, Sisters, and Laity, it was Champagnat who insisted on the need for teaching Brothers to educate those young people who most often lacked access to the education that could help them become good Christians and good citizens. Champagnat’s dedication to this cause was galvanized just months after taking up his first parish assignment, when he visited the home of a dying young boy who faced extreme anxiety about his death, in part because of his ignorance of the love of God.

Marcellin Champagnat founded the Marist Brothers on January 2, 1817, when two young men decided to join him in his mission. He set about at once, in addition to his parish ministry, to educate uncultured young students, all the while living in abject poverty and trusting totally in the will of God, and the solicitous protection of the Virgin Mary, to whom he entrusted all for the sake of Jesus.

Champagnat died at the age of 51, his health having been worn out by his immense workload and excruciating illnesses.

At his canonization in 1999 by Pope JohnPaul II, the Holy Father said of him, “Saint Marcellin proclaimed the Gospel with a burning heart. He was sensitive to the spiritual and educational needs of his time, especially to religious ignorance and the situations of neglect experienced in a particular way by the young.”