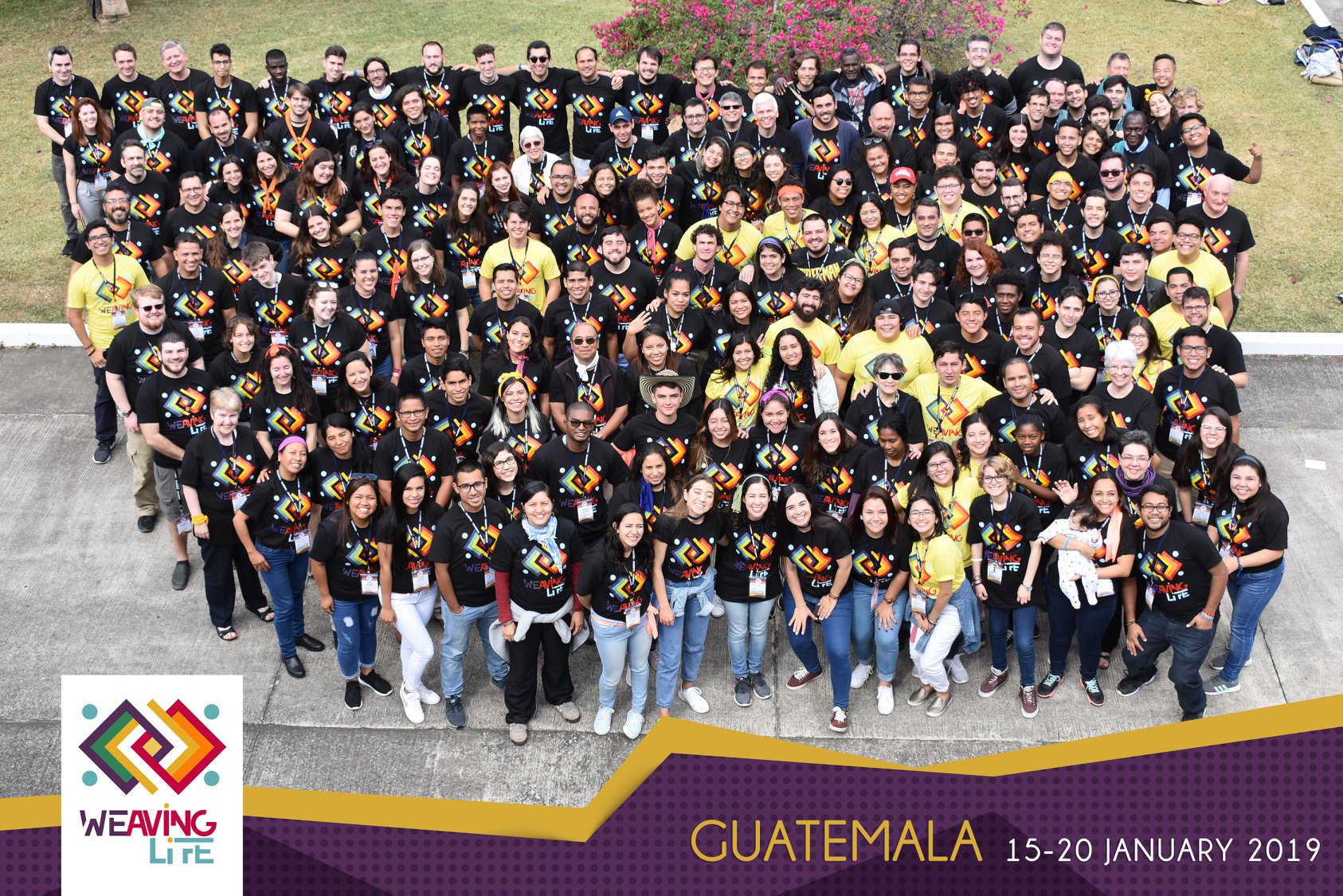 Songs, Joy and excitement filled the air as the International Gathering of Young Marists began on Tuesday, January 15 in the Center for Marist Formation located in Guatemala City in Central America.

Brother Carlos Rojas welcomed everyone and began to motivate the crowd using the theme song, “Weaving Life”, which also served as the theme of the day.

As part of the opening ceremony, a prayer service, led by Brother Juan Antonio Sandoval, invited the participants to place the success of the event in the hands of Mary, Our Good Mother. A statue of the blessed Mother was processed into the gathering hall in typical Guatemalan tradition. Afterwards, Brother Hipólito Pérez, Provincial of Central America, welcomed the participants to the beautiful country.

The second day of the International Gathering of Marist Youth began with different activities for the representatives of the four Marist branches: Fathers, Sisters, Missionary Sisters and Brothers.

The day began with singing practice for the official opening mass. This was followed by two dynamics that motivated the participants and gave them energy to face the day.

To set the ball rolling into the main reflection of the day, the Marist Brothers - through the Superior General, Brother Ernesto Sánchez - shared with the participants on the theme of Community. The experience and sense of "brotherhood” lived in their community was displayed through the incorporation of the councillors (Brothers Luis Carlos Gutiérrez, Ben Consigli and Sylvain Ramandimbiarisoa).

In the afternoon, the young people were led to the City of Antigua, Guatemala, where, in their life-giving groups (communities), they were able to visit important places in the city. Memories of this traditional city were experienced and shared.

If there is one word to describe the feeling of the young people at the International Gathering of Marist Youth 2019, it is excitement! To begin the third day, the planning team motivated the participants through a series of activities, songs, and dance movements that that filled the Marist Hall with lots of energy and enthusiasm.

In addition, the participants viewed a video prepared by young Marists who gathered in the Notre Dame school in Kipadawan, located in the Philippines. In December 2018 the young Marists of the Philippines hosted their own Marist Youth Festival and recorded a special message of welcome and shared words of encouragement creating a sense of solidarity and emphasizing our global Marist presence. Both festivals will have explored the same themes as prepared by the planning team.

Also, the participants were invited to reflect on the themes of Spirituality and Solidarity over the next two days. Through and interactive presentation prepared by Sr. Grace Ellul, Superior General of the Marist Sisters, and Sr. Anne McCabe, member of the General Council, the sisters led the young adults through a journey of the heart, inviting them to take time to strengthen their relationship with God through personal prayer.

Sister Georgeanne Marie Donovan, Superior General of the Marist Missionary Sisters, focused on the theme of Solidarity using the mission and experience of the Sisters. For the students to gain a better understanding of the importance of solidarity the group was divided into to two sessions where each young Marist had an opportunity to participate in one of several solidarity projects taking place throughout Guatemala City. Among the places visited were: la Escuela Marista (Marist School), the school center of Bro. Moisés Cisneros, the Casa Alianza Project (which focuses on children with developmental issues), Ciudad Anini (A program for sexually abused young women), and el Hogar y Centro Ocupacional de ancianos San Vicente de Paul (A center for the aged and infirmed).

Each group took a day to focus on these two important elements of Marist life and then switch on the following day.