Nearly one thousand people gathered on July 23, 2016 to participate in the Eucharistic celebration in Lyon, France that commemorated 200 years since the first Marists promised to start the Society of Mary. The Mass, held at the Basilica of Fourvière, was presided by the superior general of the Marist Fathers, Father John Hannan. 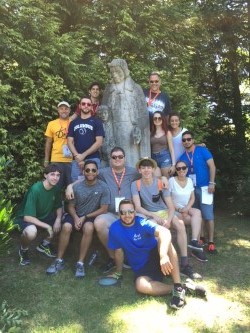 13 young people from the province of the United States took part in the Lyon events. The theme of this year’s Marist Youth Festival was "Dare To Dream”. The young people were challenged to continue to make this Marist dream a reality as we begin a new century of Marist Life.