One year in Brownsville, Texas, I was invited to participate in Las Posadas, a traditional seasonal observance common to Mexican and some other Latin American communities.  The custom takes its name from the inns that we imagine Joseph and a VERY pregnant Mary visited in search of lodging as she prepared to give birth.  A procession was led by parish members portraying the newlyweds, and as we travelled to previously designated houses, they sang asking for the mercy of hospitality, only to be constantly turned away in song by a series of “innkeepers” until they finally found welcome at the last stop of the night.  This last stop became the site of the evening’s party.

Christian theology proclaims Jesus to be the embodiment of God’s love for us—a love so powerful that it took on its own life.  In this sense, we can reflect on the Las Posadas ritual as a meditation on how we respond to love waiting to dawn in our own lives.  Do we welcome it joyfully?  Are we willing to make room for it and accept its transformative possibilities?  As we see in this depiction, the only way to truly embrace and welcome love is to act in a loving way to those who cross our paths, not only those who are our pre-established favorites.

This dynamic may challenge us even more when we look more at the biblical texts describing the Christmas events instead of our cultural memory that has transformed these stories over time.

First, it must be clear that the journey to Bethlehem from Nazareth was an explicit case of forced migration mandated by government policy.  Whichever local officials required Joseph and Mary to return to Joseph’s ancestral home for the census in spite of any danger to the expectant mother or her child chose to put legal exactitude above human compassion—and they missed the chance for love to be born among them. While one could argue the extent of similarity between this displacement and today’s deportations and even talk of denaturalization, it helps to note that this trip was not a merely temporary move… after Jesus’ birth, the Holy Family established permanent housing in Bethlehem, presumably because they no longer had a dwelling in Nazareth.

The biblical text doesn’t actually say anything about a series of innkeepers, but only that, because there was no guest room available, the infant Jesus was placed in a feeding trough (for those of you unsure what a “manger” really is).  Were there inns as depicted in Las Posadas, including a final one that while had no standard rooms but could offer a stable?  Or did Joseph find some of his cousins who were unwilling to take them in because of the scandal they had heard surrounding Mary’s pregnancy?  How often do we refuse to show and welcome love based on what we think we know of somebody’s reputation?

Did Mary and Joseph have to find shelter wherever they could, even without permission?  Or did they even find a roof that night, since only the feeding trough is mentioned?  At a certain point, you cannot stop a baby from being born, and you cannot control the force of love breaking into the world, even if the context is inconvenient.  Remember too that the first people to discover the Holy Family according to Luke’s Gospel did not include the owner of an adjacent home or inn, but rather shepherds required to pass the night in the fields with their flocks.  Not even the actual owners of the flocks seemed to be in the know.  From the very beginning, Jesus had friends in low places.  They were the ones able to respond most immediately to this breakthrough of love.

Of course the story continues, and the Holy Family settles down in Bethlehem for a while—they have a house to live in by the time the wise men visit—for the truly wise will indeed seek love even if it takes some time for them to find it.  As a result of a warning provided by these sages however, Mary and Joseph soon flee to Egypt in order to escape state terror.  These holy refugees seek asylum, albeit without any official government process to administer their status.  Only years later do they return to Nazareth, where Joseph and Mary were living prior to their trip to Bethlehem.  How often do we see laws acting not only with indifference to love but in outright hostility toward it, endangering the vulnerable to appease the greed and ambition of the powerful? 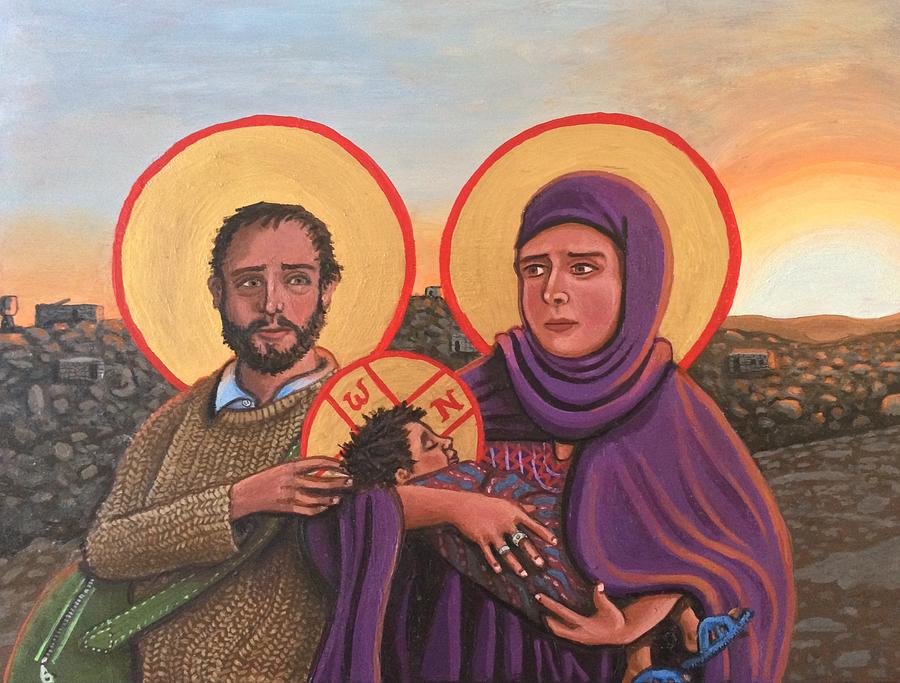 Any religious tradition of true value has the dual task of comforting and challenging its adherents within the contexts of their own lives.  Surely, there is room for Christians to find both comfort and challenge in various stories of biblical migration, particularly this time of year.  In particular though, for those of us who believe that God entered into our history, where do we see God present in our current situations?  What is our personal response to those in great need, including those who lack stable housing?  Do we remain empathetic when they skirt the laws we view as important out of what they see as survival necessity?  What is our political response to government officials and policies that either actively endanger the vulnerable or prevent the endangered from seeking safety?  Do we have the heart to see the families at our own borders as holy families as well?

We started today’s reflection with a celebration asking whether there is any room at the inn.  We must each ask ourselves whether there is room in our hearts for love.  Saying yes requires more than verbal assent however, because making room will require action, creativity, and sometimes sacrifice.

This week’s “ear candy” and “brain food” are tied closely to love, the theme of the Fourth Sunday of Advent.  First, the Neville Brothers imagine what love would be like if it were personified, first as a woman and then as a man—perfect for the celebration of love taking on human flesh and living among us.  The “brain food” is a classic of short fiction and the Christmas season: a well-known work that speaks powerfully of true love and how it manifests itself in human relationships.

Brain Food: “The Gift of the Magi” by O. Henry