I write these blog posts a couple days ahead of time so there is time for me to revise as necessary and then publish for Saturday morning.  For me right now, it is the evening of Thursday, September 13, and Lawrence, Massachusetts (along with neighboring Andover and North Andover) is smoldering in the dark after a series of gas explosions and fires damaged or even destroyed several dozen homes.  Even those with homes still intact are experiencing temporary homelessness as local leaders have enforced a door-to-door evacuation until the areas is safe again.

Readers who know me personally likely know that I’ve lived in Lawrence on two different occasions: for my first three years teaching as a Marist Brother at Central Catholic High School, and then again just last year as a full-time graduate student.  I have been able to learn that all the Brothers in Lawrence are safe and our two houses there are intact, though there was of course some time of uncertainty.  I don’t yet know about any friends, colleagues, or former students, though at this point the number of reported injuries seems to be very low compared to the number of displaced.

This week on Friday and Saturday (when you may be reading this post), the Catholic Church observes the Feast of the Exaltation of the Holy Cross and the Memorial of Our Lady of Sorrows respectively—two occasions on which well-meaning preachers may be tempted to theologize suffering as being part of God’s plan.  When was the last time that truly helped somebody feel better though?

While my thoughts are drawn to Lawrence because it is my most recent home in the USA, many are focusing on Hurricane Florence, which by objective criteria will likely become a still greater tragedy.  Elsewhere in the world, there are far greater crises unwinding that go unnoticed or ignored by too many people. When was the last time most of us heard an update on the crisis in Venezuela or the Yemen War to give two examples?

The point is not to compare or rank situations of suffering.  It is perfectly natural to focus on those hurts that are close to home, as long as that doesn’t lead you to dismiss the pain of others.  Whatever is tugging at your heart right now, whether one life is affected or one million, it is the compassion you bring to that situation that matters.  Do me one favor though: please don’t tell me it is part of God’s plan.

The way I read Genesis, God never intended our suffering.  God certainly never intended us to wound each other. He created a paradise for us in which our ancestors had every possibility to be good.  Yet, here we are, in a world where sinful choices made centuries ago, for example by slave traders or warlords, still bear poisonous fruit today.  How could it be any other way when we are so intricately bound to each other by complexity beyond imagining? That doesn’t make God an accomplice to the wrongdoing however, hatching schemes where ends justify means.

The way I read the Gospel, God knows we suffer and doesn’t prevent it.  Instead, God suffers along with us and shows us that sin certainly wounds us, but it doesn’t have the last say.  After the crucifixion comes resurrection. God’s great power in our lives is the ability to turn our crying into laughter, even if that doesn’t happen as soon as we’d like.  In other words, God’s true plan is the heroism and healing that emerge in response to tragedy, not the tragedy itself. Or at least that’s what I usually believe.

I’m not one to tell people to not feel sad.  Please, feel the way that you do. Forcing a happiness that you’re not ready for may in some ways be just as harmful as wallowing in a sadness that you are ready to move beyond.  (And now, a plug for the Pixar film “Inside Out”).

But here I come back to Our Lady of Sorrows.  She doesn’t tell us to smile or to stop crying.  “I know it hurts. It hurts so much I don’t have words for it, and it breaks my heart.”  And so we have this impossible image, confusing to so many people, of Mary, with seven swords piercing her exposed heart.  And that is all the reassurance we need to know that just as she stayed by Jesus, sharing in his suffering at the foot of his cross, so she will also stay by us when we are on our own cross.  Maybe she also gives us an idea of how we can do that for each other.

I had originally planned a more academically oriented explanation of the scriptural origins and development of this image of Mary, so if that is the blog post you would have rather read, you’ll just have to ask me about it in person. 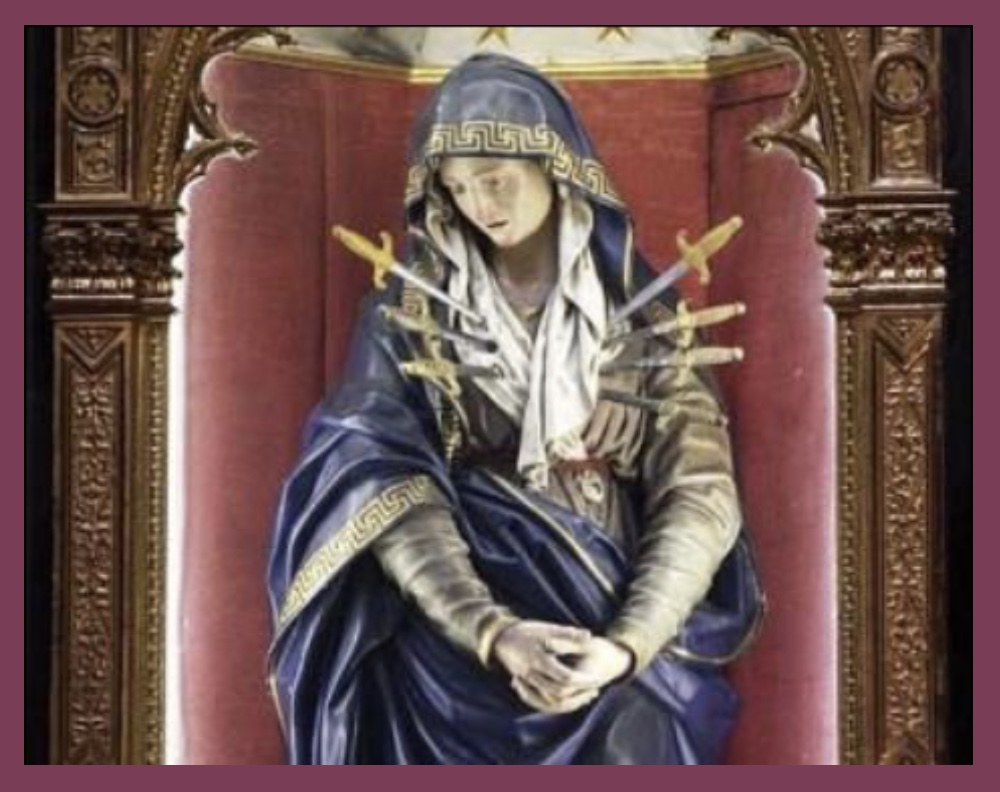 Next week is an ordinary Saturday in ordinary time, and things will be a bit lighter in this space, I promise.

In honor of Our Lady of Sorrows, this week’s “ear candy” is a song that reflects on the many worries mothers have and the many tears they shed, including tears of joy.  For “brain candy”, instead of a news article or opinion piece, I have chosen some prose by the poet Kahlil Gibran, reflecting on the link between joy and sadness.

Brain Food: “Joy and Sorrow” from The Prophet by Kahlil Gibran