Borders serve an important function.  Within the five boroughs of New York City, vehicles are not permitted to make a right turn at a red light; when I cross over from the Bronx into Westchester County however, I know that different rules apply.  Rainbow Railroad’s efforts to find asylum abroad for LGBT persons endangered by discriminatory laws in their home country are only possible because one jurisdiction ends and another begins.  For the most part, such boundaries set the geographical scope of a nation’s rights and its domestic responsibilities.

Border control is also important.  Customs enforcement helps limit the spread of agricultural disease and invasive species to new areas.  Mexico attempts to block the illegal import of weapons from the USA, and the USA tries to intercept drugs being smuggled in from various countries.  Migration control procedures can also inhibit the movements of criminals seeking to either escape justice or expand their activity.  Whether or not these immigration and customs procedures are implemented effectively and humanely is another matter however.

The Marist Brothers in El Paso help to facilitate the Encuentro Project, an immersion experience through which groups learn about some of the challenges around the border.  The border wall is a physical reality that savagely cleaves in two the sister cities of El Paso and Ciudad Juárez, although whether or not it is easily visible among the true giants of its urban and natural surroundings depends quite literally on where a person stands at any given moment.  Some people still walk or drive every day through the ports of entry to either work or study, but this has recently become much more burdensome and uncertain, as illustrated by a border-related FAQ for international commuters at UT El Paso. 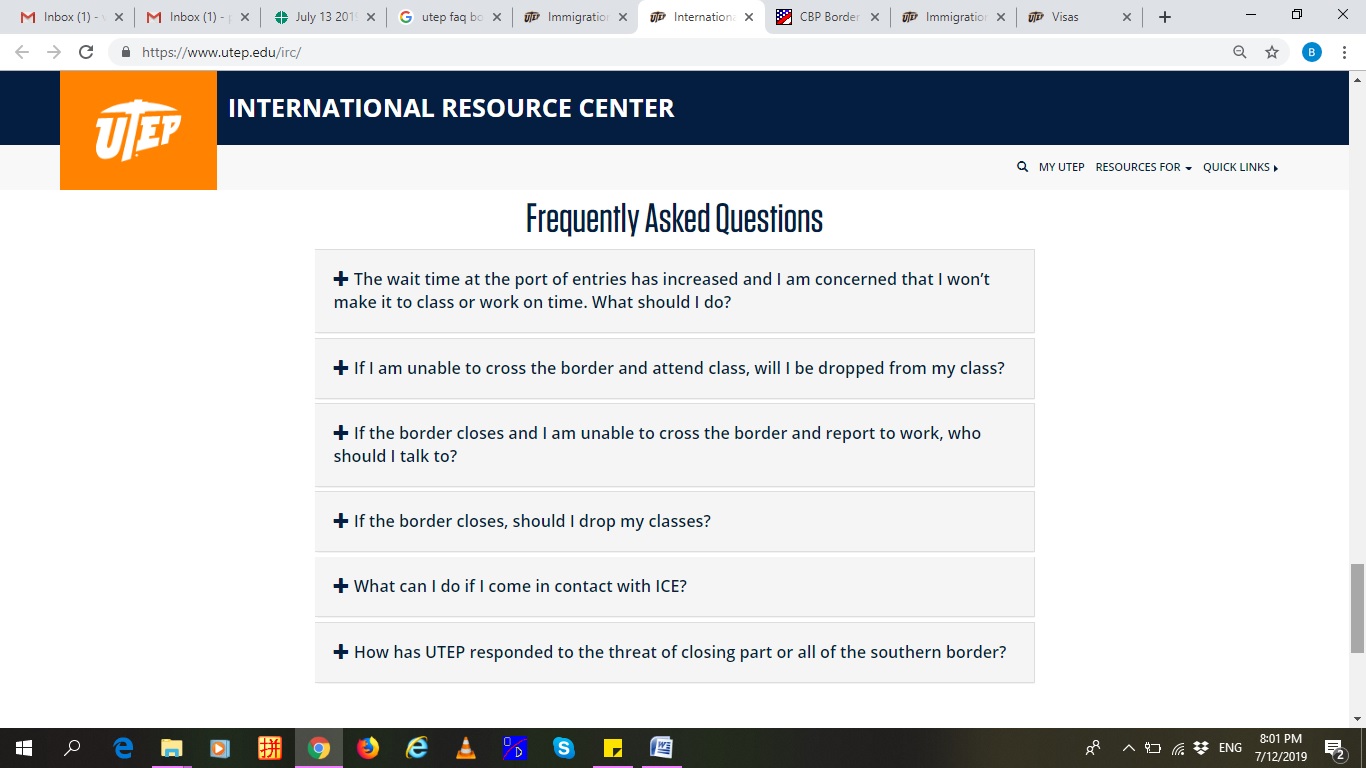 The psycho-social reality that has arisen from current border policy and related controversy also marks a true separation.  The increased burdens of crossing over create increased feelings of separation as hostility replaces hospitality: At official ports of entry into the USA, concrete barriers topped with razor wire now block lanes that have been closed, providing welcome for neither returning residents nor visitors.

Many in the USA are quick to depict those entering this country without prior approval as “illegal immigrants”.  These days however, even those who cross the border outside of designated ports of entry usually seek out Border Patrol quickly in order to hand themselves over and appeal for asylum.  As such, the vast majority of migrants in border detention centers are not illegally in the USA at all: they are undergoing a legal process that may see them deported or released in anticipation of a court hearing.  Some may even manage to eventually become citizens.  Nevertheless, the ghastly conditions present in many such detention centers have been well documented.

Encuentro Project participants volunteer at Annunciation House, which serves asylum seekers who have already been cleared by ICE via a criminal background check and an assessment of whether or not it seems that legitimate fears drove them from their home countries.  These refugees are by no means undocumented immigrants, as they actually carry US-government papers issued to them by ICE.  Ascension House gives them a clean set of clothes, a cot, meals, a chance to shower, and medical care as necessary until their domestic sponsor makes travel arrangements for their destination in the USA.  Still, the ignorant assume that these people are in the USA illegally.  What I saw during my days volunteering there were most often young adults travelling with a child or two who were overjoyed to finally be in a safe and clean environment where they were treated with love and respect.  My heart was broken open by the gratitude expressed toward me by one Guatemalan man just for helping him with paperwork.  My heart was broken open to see laughing children able to freely roam the grounds, kicking a soccer ball while their guardians rested in the knowledge they were safe.  It was a hope-filled environment, but unfortunately even the vast majority of these migrants ultimately have their asylum claims rejected.

Those sympathetic to these migrants may be tempted to see Border Patrol as a malicious force.  On the contrary, the agent we met stated himself that the great majority of migrants entering the USA are simply seeking safety and opportunity.  He spoke with empathy of the trials they face on their journey and showed the greatest pride in Border Patrol’s task of rescuing from certain death migrants lost in the desert.  He did not want a wall which he saw as useless against the drones and other technologies possessed by drug cartels, but he did want more resources from Congress to help his agency work with migrants in a more efficient and humane manner.  He acknowledged and was clearly repulsed by the bad behavior of some agents, but described it as an outgrowth of job-related frustrations.  Like any of us, this agent surely had his own faults and limitations, but he was an essentially empathetic individual.

If the FOX News crowd were to visit Ascension House with truly open eyes and ears, I hope that their minds and hearts too would be opened.  If the MSNBC crowd were to listen with genuine attention to the Border Patrol agent, I hope their hearts would be opened as well.  Perhaps these two sets of hearts could even open to each other.  We will never reach universal agreement on policy, and we don’t have to.  If we just remember to see the other as human, especially when doing so does not come easily, we can reduce the borders that today create such divisions in our social fabric.

Taking communion seriously means believing that we truly share humanity.  To me, that sounds like a better foundation for a bridge than for a wall.

This week’s “ear candy” is a touching song about hope in the midst of human tragedy.  Surprise: It turns out that love might be the only way forward.  The “brain food” is not meant to be an attack on ICE, but rather an illustration of how even well-intentioned agents can end up doing truly unnecessary harm simply because of inadequate systems in place.  ICE has only been around for 15 years, so there is still plenty of time to re-define its role.  What would a just reform of ICE policies and procedures look like?

Ear Candy: “I Heard an Owl” by Carrie Newcomer

May 11 – Builders and Creator