December 14, 2019 – Memorial of Saint John of the Cross,
Priest and Doctor of the Church

Funny things happen when we re-tell stories.  Thanks to countless Nativity sets and Christmas pageants, we are so used to imagining the wise men at the manger that we overlook the fact that the Gospels never place them in that stable at all—Matthew has their visit to the Christ-child occur in a house rather than in the emergency temporary dwelling in which Luke places the birth.  When we weave these two stories together to manufacture a cohesive whole, we risk diluting the power each possesses when considered independently.  Comparing these narratives as separate accounts not only draws out differences however, it also accentuates core commonalities.  In both, Mary conceives Jesus by the Holy Spirit, leaving Joseph to serve as foster-father.  In both, Jesus is born in Bethlehem, the town of David.  In both, the Holy Family is a family of migrants.

In Luke, Mary and Joseph are forced by political bureaucracy to travel from their home in Nazareth to Bethlehem.  Since Bethlehem was much closer than Nazareth to the Temple in Jerusalem, they waited to return home until after they had performed the requisite post-partum religious rites.  In the meanwhile, they first underwent an arduous journey necessitated by the cold indifference of political powers before suffering the danger and indignity of delivering the baby Jesus in an unsanitary stable because nobody could make room for them in spite of Mary’s late-term pregnancy.

Matthew doesn’t mention any travel prior to Jesus’ birth… in his telling, Mary and Joseph seem to have already been living in Bethlehem at the time (which would explain the house).  Even if the birth itself was easier than in Luke though, they were soon forced to flee to Egypt in order to escape mortal danger from a hostile government—they were political refugees in the truest sense.  Scripture is silent as to how warmly the Egyptians welcomed the Holy Family, but we are told they were able to stay until it was safe to return to their home country.

By either account, Jesus, Mary, and Joseph were migrants of necessity.  At best, they found meager sympathy when they were temporarily displaced by unbending government policy.  At worst, they fled for their lives and had to seek refuge in a foreign land.  All of this makes the Christmas season an especially opportune time to reflect on how we treat migrants and refugees today.  As people, especially families and children, flee for their lives, are we at least as hospitable as Egypt of that time?  Do we pay as much attention to urgent human needs as we do to government red tape?  When temporary shelter is necessary, do we seek solutions that are dignified and that protect the health and well-being of those who have thrown themselves on our mercy?  How would the Holy Family fare trying to flee to our country today? 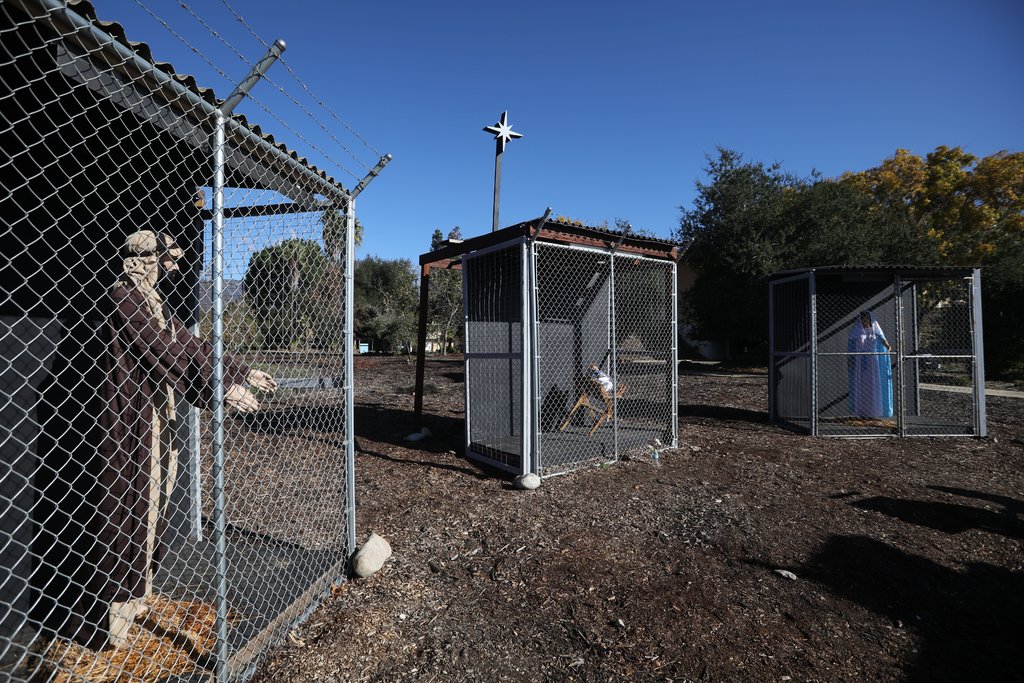 As the unconventional Nativity scene pictured above shows us, Claremont United Methodist Church had the courage to answer this question in a bold and public way in spite of the controversy it would provoke.  If we take as an example the experience of many holy families who have fled to the USA this year, we can say that the Holy Family would very likely have been separated and caged for seeking asylum, with all the callousness and neglect that implies.  The pastor of Claremont UMC said clearly and correctly that with this display is not primarily political, but rather theological in nature.  After all, Jesus makes it very clear that what we do to the most vulnerable, we do also to him.  The display just illustrates that point.

Everybody should be upset by this arrangement, but why?  It’s true that we should not treat the Holy Family in such an irreverent manner, but neither should we treat any family in such a manner.  These statues will not be damaged by this experience, however real families have suffered significant and enduring damage.  This is not political protest, it is theological protest: if Jesus meant for us to only see him in the great and mighty, he probably would have had a nicer first crib than a filthy feeding trough.  Instead, he expressed solidarity with the marginalized from the very beginning.  To truly follow Jesus is to do the same.  I am reminded of the legendary Christmas pageant in which a young boy playing the innkeeper didn’t have the heart to refuse lodging to Mary and Joseph and instead broke script to offer them his own room.  What would it look like if we each broke script for the sake of compassion?

I don’t pretend to have the solutions to our immigration conundrums or to any other major problems bedeviling us.  After all, if these situations were easy to fix, they would probably already have been resolved.  I can nonetheless recognize when some proposals are morally evil.  May we learn to fear immoral policies and decisions even more than we do impractical ones.  Let us avoid the trap of seeking to justify the unjustifiable for the sake of expediency.

This week’s ‘ear candy’ isn’t a favorite of mine per se, but it is appropriately enough about waiting.  And by the way, what if while we’re Waiting for the World to Change, God is waiting for us to do something to change it?  The ‘brain food’ is a disturbing account of volunteer doctors being refused access to vaccinate detained migrants free of cost, despite the fact that three migrant children in government custody died from the flu in 2019, equivalent to 9x the mortality rate in the general population.  We can do better.

Ear Candy: “Waiting on the World to Change” by John Mayer

Nov. 2 – Together in Loneliness

May 11 – Builders and Creator