Seeking the Grace of Encounter:

The Encuentro Project in El Paso

The “Encuentro Project”, in Ciudad Juárez (Mexico) and El Paso (United States), offers services for planning and lodging to deal with life experiences, in the area between the two countries, dedicated to migrants. The project includes direct work with applicants for asylum, migrants and refugees. Also, it offers social Catholic education about projects and the lives of migrants on the frontiers, through visits, meditation and spiritual accompaniment.

"Project Encounter" is an inter-congregational, collaborative project which includes the Jesuits, the Marist Brothers, the Sisters of San Francisco of the Holy Family, lay people, and the Instituto Fronterizo Esperanza (Border Institute Hope).

Brother Todd, coordinator of the program and manager of the project house, recently provided details of the missionary work taking place in El Paso.

“The project was born out of the last General Chapter Meeting’s push for the Brothers to go to the margins or boundaries.  The Provinces of Mexico and of the United States decided to do a joint-project addressing immigration and the problems that are being faced by migrant peoples. 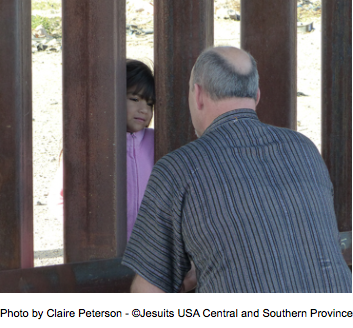 We were commissioned for one year to research and study the immigration phenomenon, problems, and possible ways that the congregation of the Marist Brothers could be of assistance. During that year we educated ourselves as much as we could by reading, meeting with persons familiar with all aspects of immigration – such as immigration lawyers, Social workers, people that work in emergency shelters and houses for immigrants, politicians, border patrol agents, bishops, priests, and other religious and lay persons that are working in border diocese and/or directly with immigrants themselves.  We also met with many immigrants (in Mexico and the U.S.), both documented and undocumented – including refugees, asylum-seekers, unaccompanied minors, DACA recipients, and persons that had been deported.  We traveled all along the United States’ southern border from McAllen, Texas to San Diego, California, and throughout many migratory hotspots in Mexico including on Mexico’s southern border in Tabasco.

We learned a great deal about the reasons that people migrate, both what’s called the “push factors” that force people from their homelands and the “pull factors” that attract people to the United States and other destination countries.

Initially, when we were meeting with immigration experts, we explained that we (as a congregation) we’re looking to initiate a project addressing unmet needs, and we were asking them what the unmet needs in the system were. Soon, we were informed that there are so many unmet needs in the field of immigration that we would be better suited focusing on particular aspects of the problem where we may be uniquely suited to help. Soon some themed areas of concern began to emerge.  These areas included hospitality: taking care of migrants’ basic needs such as food, water, and shelter, and also included huge needs for education, advocacy, and protection.

As our year concluded, we proposed four different projects to our Provincial Leadership.  The choice was then made to begin a project in El Paso, Texas which we are calling the Encuentro Project.  The project is a collaboration between the Marist Brothers, the Jesuits, the Franciscan Sisters, and the Archdiocese of El Paso, and began in August, 2018.  Our mission is both working directly with migrants at emergency shelters, and the creation of a border immersion program to educate groups of people about the realities of the border, immigration, and Catholic social teaching.

HOW MANY IMMIGRANTS AND REFUGEES DO YOU WORK WITH?

At the particular shelter where both Brother Eduardo and I work we have been receiving anywhere from 150 to close to 500 migrants per week.  However, the shelter where we work is only one part of a system of hospitality centers in El Paso.  The larger system which falls under the umbrella of Annunciation House, has been receiving between 500 and 2,500 immigrants per week.

WHERE DO THE IMMIGRANTS COME FROM AND WHO ARE THEY PREDOMINATELY?

The immigrants predominately come from Guatemala, El Salvador, and Honduras.  However, we also occasionally get immigrants from Mexico, Africa, Asia, and Russia.   Recently, we have been receiving numerous immigrants from Cuba and Brazil.

At the particular shelter where we work we receive what is referred to as “non-detained asylum-seekers”, and they primarily consist of families (usually a single parent – mother or father and one or more children) or single pregnant women.

WHAT KIND OF HELP OR SERVICE TO YOU GIVE THEM?

Typically, when people are released from ICE, they have little or no money, little or no clothing other than what they’re wearing, and rarely any resources with which to purchase transportation tickets or food.  The hospitality centers take these people in and feed them, provide them with a bed, a shower, a fresh set of clothing, and communicate with their sponsors to buy transportation tickets.  We also arrange for volunteers to then transport them from the hospitality center to the airport or bus station or train station.  Additionally, we provide them with enough food to reach their destination.

However, possibly the most important thing that we do is welcome people with open arms, treat them with dignity, love, and respect, and help them to feel safe after experiencing so much trauma in the places from which they come during their journeys, and from their treatment by U.S. Government officials since their arrival at the border.  It is amazing to see the power of love transform people from brow-beaten, traumatized and terrified, to happy, smiling, ever-so-grateful people.  Watching small children arrive frightened, exhausted, hungry, and often ill is heartbreaking.  Watching them transform into happy, playful children again within a few hours or days is incredibly uplifting.

DO YOU HAVE A WORK TEAM?

The work at the hospitality centers literally requires an army of volunteers.  We need people to welcome the immigrants and help with providing them meals, clothes, clean sheets and towels, toiletries, basic medical attention, phone calls and transportatio, as well as a myriad of other small details to make the whole system work.

There are many religious congregations helping out: Sisters, Brothers, Priests, and lay missioners. To be honest, the Sisters and lay people are doing the heavy lifting.  There are a number of Sisters and one Marist Brother (Eduardo) involved with the hospitality centers as their full-time ministry, and there has been a steady stream of Sisters (from at least a dozen different congregations) coming to help for a week to a few months.  A Jesuit priest (Rafael Garcia) and myself work at the shelter two or three days a week.  Brothers and Priests are certainly under-represented, but hopefully that’s beginning to change… We will have another Marist Brother (Peter Guadalupe) with us from February 7th until March 17th.

The inter-congregational collaboration and comradery is fantastic here in El Paso!  We are all working for a common mission, and each bringing our individual charisms as well as our individual strengths.  In my opinion, it’s a model of what the Catholic church and Religious life should be!

The Encuentro Project staff (so far) consists of a Marist Brother, a Jesuit Priest, a Franciscan Sister, and a few lay people helping out occasionally.  We had our first group come just before Christmas, and have done two more groups since, with another eleven groups lined up in the coming months. The demand for this type of experience is already high, and we haven’t even started advertising yet – we don’t yet have a website, or any marketing materials other than the flyer (which you can view here). It is pretty clear already that we need to recruit some more help.  I can certainly see the project growing quickly, as there is an abundance of needs and a genuine interest by all that have so far been exposed.

As I mentioned earlier, we have discovered that the needs are many…of the four proposals that we presented, I have absolutely no doubt that we picked the right one, but I do frequently think of other unmet needs that we are not addressing.  One in particular distresses me. We discovered during our research how large of a problem human trafficking is.  It involves millions of people right here in the United States of America.  I know that’s initially hard to believe, but just consider the amounts of prostitution in every major city – (not to ignore small towns where it exists as well), and consider the amount of child pornography on the internet, and you can quickly see how large the problem is – and that’s only considering sex trafficking – labor trafficking is huge as well.

We met with some Sisters (in California and New York) who are running safe houses for women who have been rescued from trafficking and discovered that the need for this type of ministry far surpasses the supply.  Even more disturbing – the Sisters told us that there are absolutely NO services for men that have been trafficked.  I think of that often as I see thousands of vulnerable people (especially children) being forced to migrate and they are prime targets for traffickers.

The realization that an estimated 90% of asylum seekers arriving to the U.S. will end up losing their cases and be given deportation orders, exposing them to life threatening situations and traffickers weighs heavy on my heart.  I hope that people who read this will be inspired to look into addressing that – or any of the myriad of unmet needs related to immigration and displaced peoples.