MARIST USA AT THE ENCUENTRO PROJECT

It's my last night in El Paso. The sun is setting, bathing the cities in a soft pink light - El Paso in the foreground and Juarez in the background. Lights are just beginning to come on and I have a “Grand View” here on the 2nd floor of the Encuentro Project house.

Half of our group has already departed – Miriam, Colleen and Earline - and the house is quiet. I sit in meditation, reflecting on our days here. So many words, thoughts, and emotions to process.

Thursday, November 7th:  Upon our arrival, we were greeted by Brothers Todd Patenaude, Jim Adams, and Juan Boyados, who is visiting here from the Mediterranean Province in Spain. After settling into our rooms and after a delicious meal provided by James (the caterer) we had our first of several presentations of the trip, given by Pauline Hovet, a local journalist and volunteer. She gave us an overview of what's going on in El Paso in regards to the migrants, the response from the church, and the role the volunteers are playing. She explained the acceptable reasons for being granted asylum and how right now no one is being allowed in except Mexicans and Brazilians. Hence, the shelters are not nearly as full as they were several months ago. Many are closed down for now.

Friday, November 8th:  We had an early departure Friday morning for a tour with Father Rafael Garcia, SJ, co-coordinator of the project with Br. Todd. We met Customs and Border Patrol agents at the wall - the “old wall.” They explained their jobs and described some illustrative situations. We then got a tour of El Paso, including a section of the “new wall,” which is higher and has 5-foot panels at the top.

We walked over to the bridge and watched people coming and going. The cars coming in are searched by military personnel, who evidently are not usually there. Sacred Heart Church, Fr. Rafael’s parish, is just a few blocks from the bridge and we spent some time there, exploring the statuary, architecture, and the beautiful mural on the outside wall of the adjacent building.

Our afternoon was spent at the CDR – Casa Del Refugiado. We worked from 2pm - 9pm, with jobs including laundry (sheets, towels and clothing), greeting a busload of migrants, handing out water and snacks, distributing clean clothes, helping with bedding, staffing the playroom for the children, making sandwiches, sweeping, mopping, and helping with intake. Our last task was to wash everything in the playroom with bleach (a bit earlier a child with pink eye was in there).

I spent some time sorting clothing – smelly and sweaty and dirty. I reflected on the stories behind those smells and thought about the very real people who had worn these clothes (probably for days on end). A baby’s onesie, covered in poop, basically brought me to tears.

Saturday, November 9th:  We began with a short shopping trip to buy underwear, socks, and coats, and headed over to deliver them to the shelter. We spent about 2 hours serving lunch.

After lunch we heard from Anna Hey, a lawyer with the Diocesan Migrant and Refugee Service (DMRS). She shared so much information with us about the situation, historically and currently, of what's going on at the border. She also gave us a packet of articles to further our understanding of the issues.

After dinner, we gathered around the outdoor fire pit and prayed the stations of the cross 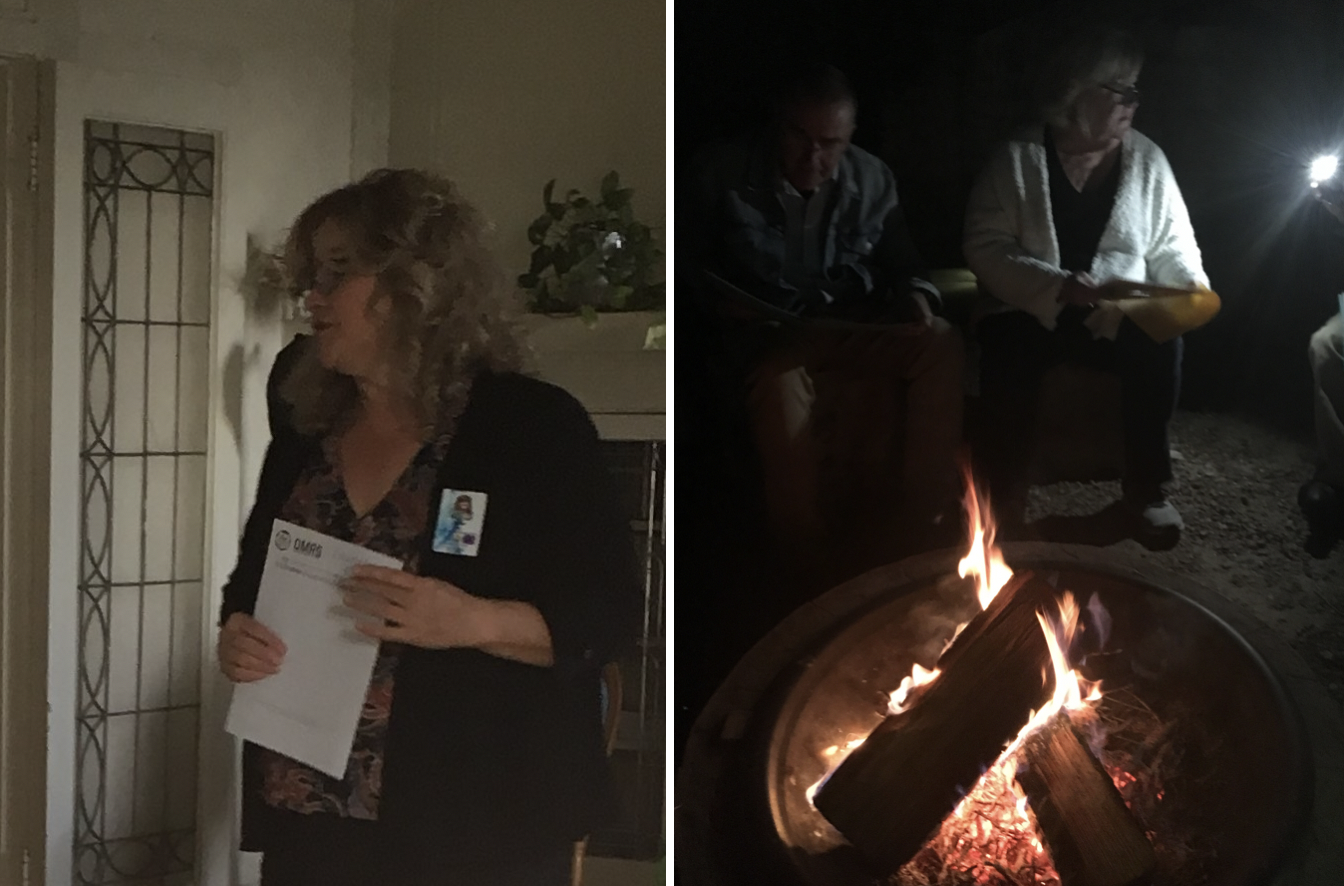 Sunday, November 10th:   After Mass at Sacred Heart, we did a little more shopping to get some hats and gloves for the kids over in Juarez. This is followed by lunch at La Tilma, a parish-run café in the school gym.

The afternoon was spent at the El Paso Holocaust museum. Here, we were reminded of some of the scary parallels between Nazi Germany and what’s going on today. Sunday also included another shopping trip to the Santa Catalina store, which sells products made by indigenous women’s co-op in Juarez.

Monday, November 11th:  The work of the Hope Border Initiative was explained by Diego.  HOPE is a faith-based non-profit, which works on research, advocacy, and leadership development. We then headed to Juarez to visit the tent cities where people are camped out awaiting their turn to ask for asylum. The temperature has dropped considerably. It’s good we purchased those hats and gloves, and the parents were grateful as we distributed them to all the kids.

Afterwards, we visited the University of Texas at El Paso to see their exhibit of artwork done by the children in the detention centers. Back at the house, we heard from Heidi Cerneka, Todd’s housemate, who is a lawyer with Las Americas Immigrant Advocacy Center. Heidi breaks down the “ways to get in,” the problems with the current policies, and the reasons people are fleeing their homelands.

We finish the night with a prayer/reflection led by Beth Riehle. Beth spent LaValla weekend with us at Esopus. She has been volunteering here at the border for nine years. Our prayer closes with a hopeful lighting of candles, and these words to I HEARD AN OWL by Carrie Newscomer:

Don't tell me hate is ever right or God’s will

Those are the wheels we put in motion, ourselves

And the whole world weeps and is weeping still

Though shaken I still believe

The best of what we all can be

And the only peace this world will know

Can only come from love.